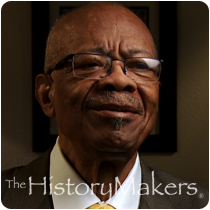 See how Reverend Dr. Marvin Griffin is related to other HistoryMakers

Religious and community leader, Marvin Collins Griffin was born on February 20, 1923 in Wichita, Kansas to Beatrice Howell and William Marvin Collins. He was raised by his aunt and uncle and was educated at public schools in Dallas, Texas before graduating from Bishop College with his B.A. degree. Griffin went on to receive four other degrees including his M.Div degree from the Oberlin Graduate School of Theology, his M.R.E. degree from Southwestern Baptist Theological Seminary, and his D.Min degree from Austin Presbyterian Theological Seminary.

Between 1951 and 1969, Griffin served as pastor of the New Hope Baptist Church in Waco, Texas. In 1969, he became a pastor at Ebenezer Baptist Church and served on its Board of Directors. While at Ebenezer, he also served as the first black president of the Austin Independent School District board in 1978 for a two-year term. Griffin founded the East Austin Economic Development Corporation and in 1990, along with other Board and church members, he helped earn a grant for the Ebenezer Child Development Center to construct a new facility. In 2002, on his thirty-third anniversary as pastor of Ebenezer, the building that housed the Development Center was named the Marvin C. Griffin Building.

In addition to being a pastor, Griffin served as the corresponding secretary of the Missionary Baptist General Convention of Texas and the Director of Christian Education Enrichment Program at the National Baptist Fellowship of Churches. Griffin also spent time teaching as a Director and Lecturer for the Teacher Training Department of the National Baptist Sunday School. He also acted as an instructor at Ridgecrest, North Carolina, teaching “Pastoral Ministry in the Black Church.” He has served in many other capacities at state and national religious gatherings.

Marvin Griffin was interviewed by The HistoryMakers on May 14, 2010.

See how Reverend Dr. Marvin Griffin is related to other HistoryMakers
Click Here To Explore The Archive Today!