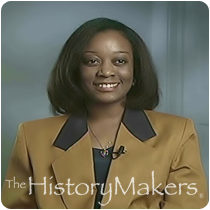 See how Reverend Dr. Maisha Handy is related to other HistoryMakers
Donate Now

Reverend Maisha Itia Handy was born on September 20th in Chicago, Illinois. Her mother and father were musicians associated with the Phil Cohran Ensemble, the Pharaohs and Earth, Wind and Fire. She started school at Ile Iwe Ominara School, which means “School of Knowledge”. Handy also attended Faulkner School and St. Felicitas Elementary School. A talented singer and a pom pom girl, Handy graduated from Whitney M. Young Magnet High School in 1985. That summer she felt called to the ministry. At Lincoln University she earned a B.S. in Criminal Justice in 1989 and briefly attended the University of Missouri Law School. Handy received her Master of Divinity from Candler School of Theology, Emory University in 1994 and her Ph.D. from Emory University in 2002. Dr. James W. Fowler III, Dr. Robert M. Franklin, Jr. and Dr. Jacqueline Grant served as Handy’s mentors.

Handy was national president of the Baptist Student Union from 1988 to1989. Licensed to preach in 1991, Handy was ordained in the gospel ministry at First Baptist Congregational Church in Chicago in 1994. She worked as youth minister and minister of music for the Suwanee Parish United Methodist Church from1994 to1998 and served as program assistant for the Black Church Studies Program at Candler School of Theology. Handy served as program assistant and research consultant for the Lilly Endowment’s Youth Theology Institute from 1994 to1997. In 1999, Handy spent a year as teaching assistant to Anglican Archbishop Desmond Tutu of South Africa. Since 2000, she has been assistant professor of Christian Education at the Interdenominational Theological Seminary (ITC) in Atlanta. Handy is currently minister of Christian Education at First Iconium Baptist Church in Atlanta, Georgia.

Handy, a member of Theta Phi National Honors Society, has presented scholarly papers to the American Academy of Religion and other institutions. Her themes range from youth and women’s issues to shame as a socializing mechanism. An example of one of her articles is, “Fighting the Matrix: Toward a Womanist Pedagogy for the Black Church,” which appeared in volume XXXII of the Journal of the ITC in 2005. Handy serves on the board of the Youth and Family Convocation and is a council member of Ndugu and Nzingha Rites of Passage. She serves as Minister of Music for the First African Presbyterian Church in Atlanta.

Handy was interviewed by The HistoryMakers on August 23, 2005.

See how Reverend Dr. Maisha Handy is related to other HistoryMakers
Donate Now
Click Here To Explore The Archive Today!