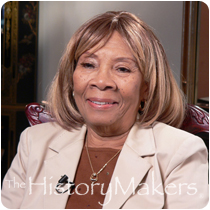 See how Reverend Dr. Mable John is related to other HistoryMakers
Donate Now

R&B singer Mable John was born on November 3, 1930 in Bastrop, Louisiana to Mertis and Lillian John. As the eldest of ten children, John began singing with her siblings as a child, putting on programs and singing traditional gospel tunes while her mother played the guitar. John and her family moved to Arkansas, where her brother, the legendary singer and Rock and Roll Hall of Fame inductee, William “Little Willie” John was born. The family later moved to Detroit, Michigan. Inspired by her brother’s success in the music industry, John started substituting for R&B singer Etta James as the opening act for “Little Willie” John’s show when he came to town. In 1956, she worked as a secretary at the Friendship Mutual Insurance Company where her supervisor was Bertha Gordy, mother of the Motown music founder Berry Gordy.

In 1958, John became the first female artist on Gordy’s new label Tamla. Although her first song, “Who Wouldn’t Love a Man Like That”, did not make the pop charts, it established John as a popular live performer. She sold out shows at the Apollo Theater in New York City and The Howard Theater in Washington, D.C. In 1965, John decided to change labels and signed with Stax Records where she believed her sound was more appropriate.

John’s first song under the Stax label, “Your Good This (Is About to End)” soared to number six on the R&B charts in the summer of 1966, and the following year, she released the single, “Same Time, Same Place”. In 1968, John’s brother William “Little Willie” John died in prison from unknown causes. Subsequently, John went into a deep depression. It was not until 1970, when Ray Charles offered her a job as the musical director of the Raelettes, that John continued her musical career. John was the co-writer of fifty songs for Ray Charles before leaving his organization in 1977. She then became the pastor and founder of Joy in Jesus Ministries in Los Angeles, California in 1986. John earned her doctorate in divinity from the Crenshaw Christian Center in 1993 and, in 1994, she was awarded the Pioneer Award by the Rhythm and Blues Foundation.

John was interviewed by The HistoryMakers on November 7, 2007.

See how Reverend Dr. Mable John is related to other HistoryMakers
Donate Now
Click Here To Explore The Archive Today!