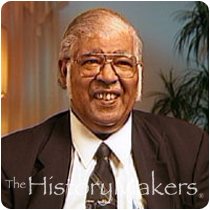 See how Reverend Dr. Latta Thomas is related to other HistoryMakers

The Reverend Dr. Latta Roosevelt Thomas, liberation theologian, was born on October 12, 1927, in Union, South Carolina. Thomas graduated from Union's Sims High School in 1947. His desire for education and his work ethic helped him to earn an A.A. from Friendship College in Rock Hill, South Carolina in 1949. Thomas was salutatorian of his class at Benedict College in Columbia, South Carolina, in 1951, where he received his
B.A. Because of his high grades, the Pepsi-Cola Company awarded him a graduate scholarship. Moving to Rochester, New York, Thomas earned a B.D. from Colgate Rochester Seminary in 1955. Meanwhile, Thomas became a full-time minister at Monumental Baptist Church in Elmira, New York, where he met his wife, Bessie "Bea" Lowery.

In 1966, Thomas earned a master's of sacred theology degree from Andover Newton Theological Seminary. At the request of a former mentor and friend, he returned to his alma mater, Benedict College. During his thirty-year tenure at Benedict, Thomas served as school chaplain and head of the Religion and Philosophy Department. He also served as pastor of Second Calvary Baptist Church in Columbia for more than twenty years. Thomas earned a doctor of ministry degree from Andover Newton in 1973. As a progressive theologian, Thomas has published numerous articles and two books, Biblical Faith and the Black American and The Biblical God and Human Suffering.

Three important factors influence Thomas' philosophy of life: the Judeo-Christian tradition, the black American experience, and the people who took an interest in his academic and professional development. Thomas retired in 2000. He and his wife live in Columbia, South Carolina, where Thomas spends his time perfecting his Greek and reading for pleasure. He is a member of the Progressive National Baptist Convention, the NAACP, and is past chairman of the South Carolina Academy of Religion.

See how Reverend Dr. Latta Thomas is related to other HistoryMakers
Click Here To Explore The Archive Today!