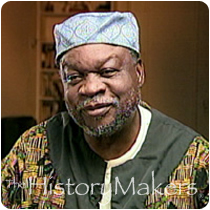 Favorite Color:
Red
Favorite Food:
Chicken, Fish
Favorite Time of Year:
Spring
Favorite Vacation Spot:
Southern United States
Favorite Quote:
We Are Either Transformers Of The Society With Which We Live, Or We Are Transformed And Deformed By It.

Favorite Color:
Red
Favorite Food:
Chicken, Fish
Favorite Time of Year:
Spring
Favorite Vacation Spot:
Southern United States
Favorite Quote:
We Are Either Transformers Of The Society With Which We Live, Or We Are Transformed And Deformed By It.

Minister and community activist Rev. Kwame John R. Porter, Ph.D. was born on April 2, 1932 in Mineral Springs, Arkansas to Steve Porter and Retha Hendricks-Porter. In 1939, when Porter was eight years old, his family moved to Kansas City, Kansas. He graduated from Douglass Elementary School in Kansas City in 1945, then from Northeast Junior High School in 1948, and subsequently from Sumner High School in 1951. Porter received his Associate Arts degree from Kansas Community College in 1953. After attending Drake University in Des Moines, Iowa for one year, Porter enlisted in the U.S. Army in October 1954, and was stationed at Ft. Bliss in Texas, Ft. Smith in Arkansas, and Ft. Carson in Colorado. In 1955, Porter reported to Ulm, Germany, where he remained until receiving an honorable discharge in August 1957.

In September of 1957, Porter returned to the U.S. and enrolled at Iowa Wesleyan College in Mt. Pleasant, Iowa. He graduated in 1959 with his B.A. degree in Sociology and minors in Religion, Philosophy and Education. Following graduation, Porter was awarded a three-year fellowship grant to explore the Christian ministry at Garrett Evangelical Theological Seminary in Evanston, Illinois. In February of 1960, he co-organized the local CORE (Congress of Racial Equality) chapter. Under his leadership, the chapter protested Woolworth stores in support of the Southern Student Sit-In Movement. In 1961, Porter became the first African American elected as President of the Dempster League. In 1962, he received his M.A. degree in Divinity from Garrett Seminary. Following graduation, Porter was appointed as assistant pastor under Rev. Harry Connor at the Normal Park United Methodist Church (UMC) in Englewood, and then as full-time pastor at the Christ UMC in that community.

In August 1962, Porter joined Dr. Martin Luther King, Jr. and thousands of non-violent protesters at the Southern Christian Leadership Conference’s (SCLC) first mass anti-segregation demonstration in Albany, Georgia. Porter was jailed for six days following the event. In August 1963, Porter attended the March on Washington; and, in 1965, he assembled eighty Chicago residents to attend the voting rights march in Selma, Alabama. In the spring of 1964, Dr. King and the SCLC leadership gave Porter permission to launch SCLC’s first Chicago chapter. Porter mobilized ten thousand Englewood residents for Dr. King’s “Get Out the Vote Rally” on October 29, 1964. Porter’s church in Englewood served as one of the rallying points for a series of anti-segregation marches into all-white neighborhoods, when the Chicago Freedom Movement invited Dr. King and his staff to spend summer of 1966 in Chicago.

From 1968 to 1970, Porter taught as Adjunct Professor at Northeastern Illinois University’s Center for Inner City Studies. In 1970, he taught an African American History course at George Williams College in Downers Grove, Illinois. From 1971 to 1974, Porter served as Dean of the Chicago Center for Black Religious Studies. He then served as Urban Vice President for Young Life International from 1974 until 1979. He also earned his Ph.D. degree in Interdisciplinary Sociology from Union Graduate School (now Union Institute & University) in Cincinnati, Ohio in 1975.

Porter is the author of six books and has received numerous honors for his commitment to social and racial justice. Porter and his wife, June, reside in Chicago’s Hyde Park community and have six children, thirteen grandchildren, and six great-grandchildren.

Kwame John R. Porter was interviewed by The HistoryMakers on December 10, 2003.