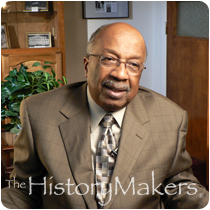 Favorite Color:
Blue
Favorite Food:
Fish (Fried)
Favorite Time of Year:
Spring
Favorite Vacation Spot:
Northern Michigan
Favorite Quote:
The Only Thing Necessary For The Triumph Of Evil Is For Good People To Do Nothing.

Favorite Color:
Blue
Favorite Food:
Fish (Fried)
Favorite Time of Year:
Spring
Favorite Vacation Spot:
Northern Michigan
Favorite Quote:
The Only Thing Necessary For The Triumph Of Evil Is For Good People To Do Nothing.

During the early part of the 1970s, Roberts became senior pastor of the historic Ebenezer Baptist Church in Atlanta, Georgia; handed picked by Reverend Martin Luther King, Sr. Roberts served as the senior pastor for a total of thirty years and was recognized for being an energetic orator and an accomplished musician. During the thirty years that Roberts presided as pastor, as many as 2,000 new members were added to the church’s congregation. Under Roberts’s leadership, Ebenezer Baptist Church’s congregation’s financial giving also increased 300 percent. When Roberts took the helm at Ebenezer Baptist Church, he launched an extensive community outreach program that included the Teenage Mother’s Ministry; tutoring and counseling programs; a food co-op; and an older adult daycare center. Roberts also envisioned starting a parochial school that would concentrate on providing a good education and clear role models for young males. Roberts was an accomplished administrator who successfully negotiated bank financing for Ebenezer’s new Horizon Sanctuary; the sanctuary, dedicated on March 21, 1999, was an eight-million-dollar edifice which encompassed the early roots of Christianity as well as symbols of African American heritage.

In 2004, Roberts was a recipient of distinguished alumni awards from Union Theological Seminary and Princeton Theological Seminary. In 2006 Roberts published Sideswiped by Eternity: Sermons from Ebenezer Baptist Church; this collection of sermons demonstrates Roberts’s commitment to the legacy of Dr. Martin Luther King, Jr., the lives of his parishioners, and the message of Jesus Christ.

Roberts was interviewed by The HistoryMakers in 2007.

Roberts passed away on February 15, 2015. He is survived by his wife, Esther Wortham Roberts, one son, two daughters and six grandchildren.