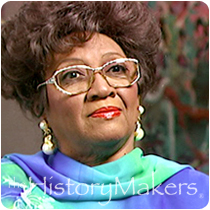 See how Reverend Dr. Johnnie Colemon is related to other HistoryMakers
Donate Now

The Reverend Dr. Johnnie Colemon, founder-minister of Christ Universal Temple, had a message: "Teaching People How To Live Better Lives". Often referred to as the first lady of America's religious community, she was the pastor of the thriving, spirited and progressive New Thought Church, which has nearly 20,000 members. Born in Columbus, Mississippi, Colemon was raised in a rich spiritual environment. Her parents, John and Lula Haley, were active members of the church and encouraged their only child to participate. Colemon demonstrated leadership skills early at Union Academy High School, graduating as valedictorian of her class. She received her B.A. at Wiley College and first became a teacher for the Chicago Public Schools and later an analyst for the Quarter Masters.

Open Your Mind and Be Healed is not only the title of her book, but her remarkable personal story of the use of universal principles of healing. After learning that she had an incurable disease in 1952, with encouragement from her mother, Colemon enrolled in the Unity School of Christianity, Lee's Summit, Missouri, where she received her teaching certificate and became an ordained minister.

Colemon was a builder and a teacher. She built six structures to spread the better living teachings: three churches, two institutions of learning and a restaurant and banquet facility. The first church was Christ Unity Temple built in 1956 and its addition in 1973. The congregation expanded to the current Christ Universal Temple, located on the sprawling campus grounds at 119th Street (named Rev. Johnnie Colemon Drive in 1996) and Ashland Avenue in Chicago. Close to 4,000 people flock every Sunday and are taught how to think, rather than what to think. Her experiences compelled her to share with others: "Change Your Thoughts and Change Your Life." Out of a sense of knowing that a need for a vital, new affiliation of independent New Thought Churches existed, Colemon's dynamic leadership led to the organization of the Universal Foundation for Better Living, Inc., an international association of New Thought Christian Churches and study groups located in the USA and abroad.

Colemon was the recipient of numerous honors and awards. She held the distinction of advancing the New Thought movement and received the Minister of the Century from the International New Thought Alliance (INTA). Colemon was awarded an honorary doctor of divinity degree from her alma mater, Wiley College in Wiley, Texas; the degrees of doctor of humane letters and doctor of divinity from Monrovia College, Liberia; and a Ph.D. in humane letters from Gospel Ministry Outreach (GMOR). Other honors include proclamations from the States of Illinois and Michigan; the City of Chicago; the Ohio House of Representatives; the Michigan Legislature; the City of Oakland, California; Miami, Florida and many others.

See how Reverend Dr. Johnnie Colemon is related to other HistoryMakers
Donate Now
Click Here To Explore The Archive Today! 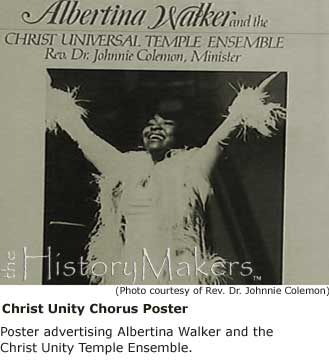 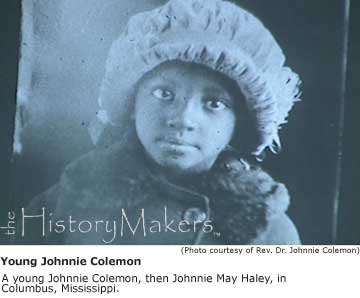