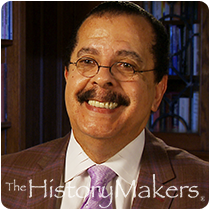 Religious leader Reverend Dr. Jim Holley was born on December 5, 1943 in Philadelphia, Pennsylvania to Effie Mae King Holley and Charles James Holley, Sr. Holley graduated with his B.S. degree in 1965 and his M.S. degree in international relations in 1968, both from Tennessee State University. He went on to receive his B.A. and M.Div. degrees in the Old Testament from Chicago Theological Seminary, and then his Ph.D. degree in higher education from Wayne State University in 1978. He later received his D.Min. degree in economic development from Drew University.

On June 9, 1972, Holley became pastor of Detroit, Michigan’s Little Rock Baptist Church. In addition to his role as pastor, he was named president and chief executive officer of Cognos Advertising Agency in 1988, and has served as dean of the Ashland Theological Seminary, police commissioner, president of the Council of Baptist Pastors, and president and chief executive officer of Country Preacher Foods, Inc., the largest minority food distributor in the world. He also went on to establish and chair the Detroit Academy of Arts and Sciences in 1997.

As a community leader in Detroit, Holley has acquired the St. Regis Hotel, the Little Rock Pharmacy, the Family Life Center, the Little Rock Health Care Home, a local strip mall, and an education complex for high school dropouts. He is also the author of numerous spiritually-focused books, including the Handbook for Brotherhood Organizations (1990); Manual for Brotherhood Organizations (1990); The Mission, The Minister, The Ministry (1990); A Guide to Successful Preaching & Pastoring (1992); The Drama of Human Suffering (1992); The Buck Stops Here (1994); Jesus, This is Jimmy (1994); The Spirit Speaks: Daily Spiritual Motivation for Successful African Americans (1997); Creating a Can Do Attitude in a Can't Do Atmosphere (2000); and When the Vision is Larger Than the Budget (2006).

The Reverend Dr. Jim Holley was interviewed by The HistoryMakers on June 24, 2014.