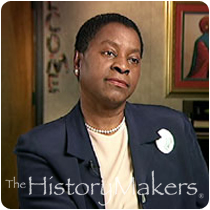 See how Reverend Dr. Jacquelyn Grant is related to other HistoryMakers
Donate Now

Jacquelyn Grant was born in Georgetown, South Carolina, on December 19, 1948. Attending Catholic school at an early age, Grant then moved on to public schools, graduating from Howard High School in 1966. From there, she attended Bennett College, the Turner Theological Seminary in Atlanta, Georgia, and earned her Ph.D. from Union Theological Seminary in New York City.

Grant became involved with the Women's Studies Program at the Harvard Divinity School within the Women's Research Program in 1977. Her involvement there led to the creation of the Women's Studies in Religion Program, and she remained there until 1979. Grant founded the Center for Black Women in Church and Society at the Interdenominational Theological Center in 1981, where she continues to serve as director and professor. As a practicing minister, Grant has served as the assistant minister at Flipper Temple African Methodist Episcopal Church from 1980 to 1982. She is presently the assistant minister at the Victory African Methodist Episcopal Church in Atlanta.

A successful author, Grant has written or edited several books, including White Women's Christ and Black Women's Jesus: Feminist Christology and Womanist Response, the all-time best selling book released by Scholars Press, and her most recent book, Perspectives on Womanist Theology. Grant was the recipient of the Dr. Martin Luther King, Jr. Ministry Award in 1986 and has been nominated as the Woman of the Year in Religion by the Iota Phi Lambda Sorority. She also appears in Who's Who Among African Americans. Grant and her husband, the Reverend John Collier, live in Atlanta.

See how Reverend Dr. Jacquelyn Grant is related to other HistoryMakers
Donate Now
Click Here To Explore The Archive Today!