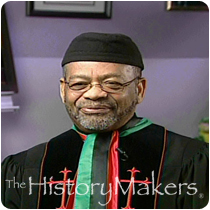 See how Reverend Dr. J. Alfred Smith, Sr. is related to other HistoryMakers

Reverend Smith was called to the ministry in 1951. In 1952, he received his B.S. degree in elementary education from Western Baptist College. Reverend Smith also received his bachelor’s degree in divinity in 1959 from the Missouri School of Religion and his master’s degree in theology, church, and community in 1966. He also earned his master’s degree in American Church History from the American Baptist Seminary of the West in Berkeley, California in 1972. Reverend Smith earned his doctor of ministry degree from the Golden Gate Baptist Theological Seminary Simi Valley, California in 1975.

Reverend Smith was named senior pastor of Oakland, California’s Allen Temple Baptist Church in 1971. He was elected president of the Progressive Baptist State Convention of California in 1979, and president of the Progressive National Baptist Convention in 1986. Smith joined the teaching faculty at the American Baptist Seminary of the West as professor of Christian Ministries in 1992. He is the author of several books including On The Jericho Road: A Memoir of Racial Justice, Social Action, and Prophetic Ministry, Speak Until Justice Wakes: Prophetic Reflections, and most recently Sounding The Trumpet: How Churches Can Answer God’s Call to Justice. He retired from the Allen Temple Baptist Church in 2009 and is succeeded by his son, Rev. James Alfred Smith, Jr.

Reverend Smith has received several awards and honors for his work. The Oakland Tribune named Smith the Outstanding Citizen of the Year in 1990. In 2001, he was awarded the Lifetime Achievement Award by the Greenling Institute, a public policy organization in Berkeley, California. The East Bay Agency for Children awarded Smith the Humanitarian of the Year Award also in 2001. Smith presented the Rev. Dr. J. Alfred Smith Conference on Church and Social Action most recently in 2015 in Columbia, Missouri

See how Reverend Dr. J. Alfred Smith, Sr. is related to other HistoryMakers
Click Here To Explore The Archive Today!