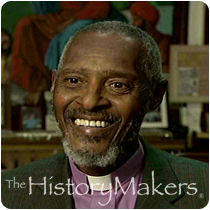 See how Reverend Dr. Herbert D. Daughtry is related to other HistoryMakers

Pastor and activist Reverend Herbert Daughtry was born January 13, 1931, in Savannah, Georgia to Emmie Cheatham Williams and Bishop Alonzo Austin Daughtry. When he was one year old, his family moved to Augusta, Georgia. His parents separated shortly after, and his mother returned to Savannah. Daughtry moved back and forth between Savannah and Augusta as a child. His father was heavily involved in the church and Daughtry was raised in a household dominated by this religious upbringing.

When Daughtry was around eleven years old, his family moved north to Brooklyn, New York, and shortly after to Jersey City, New Jersey. Daughtry had trouble adjusting to the interracial classes in Jersey City and returned to take classes in Brooklyn. As a black child from the South, Daughtry found himself a frequent target of derision from his peers, both black and white. In response, Daughtry became regularly disruptive in school, and eventually fell into a decade-long struggle with gambling, crime and drug use. In 1950, Daughtry, hoping to get clean, joined the army, but remained strung out on heroin and was discharged after only a year.

In 1953, Daughtry was imprisoned for armed robbery and assault charges. While in prison, he experienced a religious conversion that changed his life. When he was released, Daughtry returned to the church, becoming a fourth generation minister in his family. In 1958, he became pastor of the House of the Lord Church in Brooklyn, and was named national presiding minister a year later, a post he has held ever since. In 1962, Daughtry married Karen Smith, with whom he would have four children. In the late 1960s, Reverend Daughtry became known for his activism in the struggle for school integration, and worked with organizations such as Operation Breadbasket. He became a significant figure in the Coalition of Concerned Leaders and Citizens to Save Our Jobs in 1977, boycotting Brooklyn businesses in order to obtain jobs and services for Brooklyn African Americans.

In 1982, Daughtry founded the African People’s Christian Organization, which sought to create an African Christian nation by highlighting both African origins and biblical teachings. Two years later, Daughtry became a special assistant to Reverend Jesse Jackson during his presidential campaign and accompanied him on his trip to the Vatican to advocate for a firmer stand on human rights. In 1991, Daughtry participated in Mayor David N. Dinkins’ delegation to South Africa, and met with Nelson and Winnie Mandela.

Reverend Daughtry has published several books. His 1997 book, No Monopoly on Suffering: Blacks and Jews in Crown Heights and Elsewhere dealt with the 1991 crisis in ethnic tensions in that neighborhood. He also published A Seed Planted in Stone - The Life and Times of Tupac Shakur, a book that follows his relationship with the slain rapper, who joined Daughtry’s congregation when he was only eleven years old. In 2003, Daughtry led a delegation of multi-faith protesters to Iraq, in a last-ditch effort to preserve peace in that nation. Daughtry lives in Brooklyn, New York, with his wife Karen.

See how Reverend Dr. Herbert D. Daughtry is related to other HistoryMakers
Click Here To Explore The Archive Today!