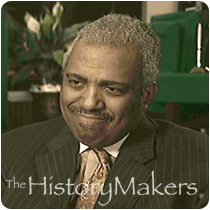 Favorite Color:
Black
Favorite Food:
Turkey
Favorite Time of Year:
Fall
Favorite Vacation Spot:
Africa
Favorite Quote:
To Whom Much Is Given, Much Is Required.

Favorite Color:
Black
Favorite Food:
Turkey
Favorite Time of Year:
Fall
Favorite Vacation Spot:
Africa
Favorite Quote:
To Whom Much Is Given, Much Is Required.

See how Reverend Dr. Gregory Smith is related to other HistoryMakers

Reverend Gregory Robeson Smith was born on September 22, 1947 in Philadelphia, Pennsylvania. He is the Senior Pastor of the Mother African Methodist Episcopal Zion Church in Harlem, New York. His maternal grandfather, Benjamin Congleton Robeson, was very active in the local community activities of Harlem. As a child, Smith’s family history was steeped in the history of the church. In 1936, his grandfather became the pastor of Mother African Methodist Episcopal Zion Church, and his uncle Paul Robeson often attended and spoke out against the discrimination that existed at the time.

In 1954, Smith earned his diploma from Dewitt Clinton High School in Bronx, New York. He received his B.A. degree in history in 1959 from Livingstone College in Salisbury, North Carolina. Continuing his education, he received his M.B.A. degree in marketing and finance and his M.A. degree in divinity from the University of Wisconsin. He completed his education with his Ph.D. in higher education administration and finance and his Ph.D. in ministries. Smith has integrated his careers as a business executive, public activist and religious leader. He has spent over twenty years working in marketing and finance with several Fortune 500 companies.

In 1990, Smith was appointed by President George Bush as President and CEO of the African Development Foundation, an independent federal agency in Washington, D.C., with offices in twenty-five African nations. Smith continued to serve under the Clinton Administration until May 1995 when he became the Senior Pastor of the Mother African Methodist Episcopal Zion Church in Harlem, New York. The church is known as the “Freedom Church” for the central role it played on the Underground Railroad. It was attended by Frederick Douglass, Sojourner Truth, and Harriet Tubman.

Smith holds positions on several boards. He is Deputy Grand Master of the Prince Hall Masons of the State of New York. Smith is President of the Prince Hall Temple Associates, Inc. and has received the distinction of being one of the Outstanding Men of America.

Smith resides in New York with is wife and family.

Smith was interviewed by The HistoryMakers on January 24, 2007.

See how Reverend Dr. Gregory Smith is related to other HistoryMakers
Click Here To Explore The Archive Today!