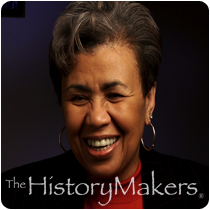 See how Reverend Dr. Elaine Flake is related to other HistoryMakers

A co-pastor at one of the largest churches in New York, Reverend Elaine Flake was born on July, 2, 1948 an only child to Leroy and Lorene McCollins in Memphis, Tennessee. In 1970, she graduated with her B.A. degree in English from Fisk University and went on to get her M.A. degree in English from Boston University. In 1993, Flake earned her Masters of Divinity degree from Union Theological Seminary in New York. She was also awarded a D.D. degree from United Theological Seminary in Ohio where her husband, the Reverend Floyd Flake was an alumnus.

In 1976, Flake assumed a leadership role at The Greater Allen A.M.E. Cathedral of New York alongside her husband. Through their work, The Greater Allen A.M.E. Cathedral became the 57th largest church in America and was featured nationally in media like Ebony Magazine and The History Channel. In 1983, she co-founded the Allen Christian School in Jamaica, NY, serving over 500 African American students. She went on to found the Allen Women’s Resource Center providing services to women and children who are victims of domestic abuse. The Center is also partnered with New York’s ‘Superwoman Program’ to help women find untraditional career fields. That same year Reverend Flake began the Allen Prison Ministry, the Allen Cancer Support Ministry, and the Allen HIV/AIDS Spiritual Support Ministry. These resources together made the Cathedral a central point in Queens, New York. For twenty-seven years, she has also hosted annual spiritual retreats/conferences for women. In 1999, she became the co-Pastor of the Greater Allen A.M.E. Cathedral of New York.

In the late 1990’s Flake contributed to publications about spirituality including the Women of Color Study Bible compiled by World Bible Publishing and Souls of My Sisters: Black Women Break their Silence, Tell Their Stories, and Heal Their Spirits edited by Dawn Marie Daniels and Candace Sandy. In 2003, Flake and her husband co-authored their own book Practical Virtues: Everyday Values and Devotions for African American Families Learning To Live With All Our Souls filled with historical narratives related to spiritual values. Together they also wrote the African American Church Management Handbook and in 2007, Flake alone wrote God in Her Midst: Preaching Healing to Hurting Women.

Flake lives in New York City with her husband Floyd and they have four adult children, Aliya, Nailah, Robert, and Harold.

Elaine Flake was interviewed by The HistoryMakers on April 27, 2010.

See how Reverend Dr. Elaine Flake is related to other HistoryMakers
Click Here To Explore The Archive Today!