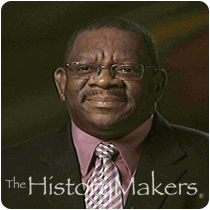 See how Reverend Dr. Dwight Andrews is related to other HistoryMakers
Donate Now

Musical theorist, composer and minister, the Reverend Dwight Douglas Andrews was born on September 24, 1951, in Detroit, Michigan, to city administrator James Wildrex Andrews and Lovetta Foster Andrews. He attended Longfellow Elementary School and Durphy Junior High School, where music instructor Andy White introduced him to live jazz performed by Yusef Lateef, Ramsey Lewis, the Jazz Crusaders and other greats. At Cass Technical High School, Andrews studied the classics and learned music theory from Marilyn Jones. He also led his own band called the Seven Sounds, which often opened for the group Parliament-Funkadelic. Earning a partial scholarship to the University of Michigan in 1969, Andrews played in the marching band at two Rose Bowls and participated in the Black Action Movement (BAM). Receiving his B.A. degree in 1973 and his M.A. degree in music, Andrews went on to Yale University to earn his Masters of Divinity degree in 1977 and his Ph.D. in music theory in 1993.

Ordained as a minister in 1978, Andrews served as associate pastor of Christ’s Church as well as a faculty member of the Music Department and the Department of African American Studies. He served as the Yale University campus chaplain for ten years. At Yale University, Andrews met Lloyd Richards of the Yale Repertory Theatre and playwright, August Wilson. As the Yale Repertory’s resident music director, Andrews would go on to compose the original musical scores for most of the August Wilson Broadway productions including Ma Rainey’s Black Bottom, Joe Turner’s Come and Gone, The Piano Lesson and Seven Guitars. Andrews also composed movie and television scores for The Old Settler, W.E.B. DuBois: A Biography in Four Voices, In Her Own Words, Homecoming, Ms. Evers Boys and I’ll Make Me A World. He worked with Sean “P. Diddy” Combs and Phylicia Rashad on a new Broadway production of A Raisin in the Sun. Specializing in woodwinds, Andrews has served as a multi-instrumentalist on over twenty-five jazz and new music albums. He can be heard on Jay Hoggard’s The Right Track with Hilton Ruiz and Jack Dejhonette.

Since 1994, at Emory University in Atlanta, Georgia, Andrews has served as an associate professor of music theory, where he teaches “The History of Jazz” and “Sacred Music in the United States.” He also serves as pastor of First Congregational Church, where Rev. Andrew Young is associate pastor. He was the first Quincy Jones Visiting Professor of African American Music at Harvard University in 1997. Andrews has received the Pew Trust/TCG Artist Residency Fellowship, a Mellon Fellowship and Emory University’s Distinguished Teacher Award.

See how Reverend Dr. Dwight Andrews is related to other HistoryMakers
Donate Now
Click Here To Explore The Archive Today!