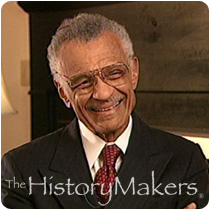 See how Reverend Dr. C.T. Vivian is related to other HistoryMakers
Donate Now

Reverend C. T. Vivian was born Cordy Tindell Vivian on July 30, 1924 in Howard County, Missouri. As a small boy he migrated with his mother to Macomb, Illinois, where he attended Lincoln Grade School and Edison Junior High School. Vivian graduated from Macomb High School in 1942 and went on to attend Western Illinois University in Macomb, where he worked as the sports editor for the school newspaper.

His first professional job was recreation director for the Carver Community Center in Peoria, Illinois. There, Vivian participated in his first sit-in demonstrations, which successfully integrated Barton's Cafeteria in 1947. Studying for the ministry at American Baptist College in Nashville, Tennessee in 1959, Vivian met Rev. James Lawson, who was teaching Mahatma Ghandhi's nonviolent direct action strategy to the Student Central Committee. Diane Nash, Bernard Lafayette, James Bevel, James Forman, John Lewis and other students from American Baptist, Fisk University and Tennessee State University executed a systematic non-violent campaign for justice. On April 19, 1960, 4,000 demonstrators marched on City Hall where Vivian and Diane Nash challenged Nashville Mayor Ben West. As a result, Mayor West publicly agreed that racial discrimination was morally wrong. Many of those students became part of the Student Nonviolent Coordinating Committee (SNCC). In 1961, Vivian, now a member of the Southern Christian Leadership Conference (SCLC) participated in Freedom Rides replacing injured members of the Congress of Racial Equality (CORE). Vivian was appointed to the executive staff of the SCLC in 1963, when Dr. Martin Luther King, Jr., named him national director of affiliates. Two years later, in an incident that would make national news, Vivian confronted Sheriff Jim Clark on the steps of the Selma courthouse during a voter registration drive. After an impassioned speech by Vivian, Clark struck him on the mouth, portraying Clark to the world as a racist. In 1969, Vivian wrote the first book on the modern-day Civil Rights Movement, entitled Black Power and the American Myth. During these years, he also started a program entitled Vision, sending students from Alabama to college; the program later came to be known as Upward Bound. By 1979, Vivian had organized and was serving as chairman of the board of the National Anti-Klan Network, which is known today as the Center for Democratic Renewal.

Vivian is also the founder of the Black Action Strategies and Information Center (BASIC), a workplace consultancy on race relations and multicultural training. In 1999, Vivian turned the leadership of BASIC over to one of his sons. Vivian recently launched a new organization (Churches Supporting Churches) in response to the help needed for the victims and churches affected by Hurricane Katrina.

Vivian was interviewed by The HistoryMakers on March 7, 2004.

See how Reverend Dr. C.T. Vivian is related to other HistoryMakers
Donate Now
Click Here To Explore The Archive Today!