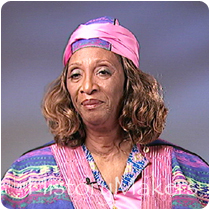 See how Reverend Dr. Barbara L. King is related to other HistoryMakers

Minister and founder of the Hillside Chapel and Truth Center, Inc., in Atlanta, Georgia, the Reverend Dr. Barbara Lewis King has played an important role in the African American church and community for many years. Born in Houston, Texas, King was raised as a member of the legendary Antioch Baptist Church, where she received a very early spiritual orientation. King earned a bachelor’s of arts degree in sociology from Texas Southern University. She is also a professionally trained social worker, having earned a M.S.W. degree from Atlanta University. King has also received three honorary doctorates of divinity degrees from Bethune Cookman College in Daytona Beach, Florida, the Christian Church of Universal Philosophy in Seattle, Washington, and the University of Metaphysics in Portland, Oregon.

Reverend King is also the founder and president of the Barbara King School of Ministry, which was opened its doors in 1971. She has also tried to extend her ministry throughout the world. She has traveled extensively in the United States, and several countries abroad including Finland, Israel, Egypt, Kenya, Senegal, South Africa, the Caribbean, Brazil, Russia, England, and British Guiana. Because of this, her ministry was the first African American New Thought affiliate to establish a sister church in South Africa in 1994. Beyond her ministry, King is the author of seven books and monologues, such as Piddlin for the Soul, Love Your Body Temple, and What is a Miracle?

King has been recognized in numerous publications and is the recipient of many awards. Some publications include: Newsweek, Essence, Dollars and Sense, Focus, Upscale, and Gospel Music Ministry Connection Magazines. In 2003, Savoy Magazine’s Power Issue of 100 Most Influential Blacks in America listed Reverend King as number eight among female ministers. On August 18, 2001, King received the highest honor bestowed on a woman. After many rituals, prayers, and ceremonies she became the first female enstooled as a Chief at Assin Nsuta, Ghana, West Africa. Her stool name is Nana Yaa Twunmwaa I. She is also the mother of one son, Michael.

See how Reverend Dr. Barbara L. King is related to other HistoryMakers
Click Here To Explore The Archive Today!