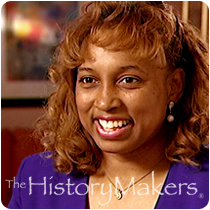 See how Reverend Dr. Angelique Walker-Smith is related to other HistoryMakers
Donate Now

The Reverend Dr. Angelique Walker-Smith was born on August 18, 1958, in Cleveland, Ohio, to Reverend Roosevelt and Geneva Walker. As a child, she spent summers and holidays in the rural south in Alabama with her family and still maintains a kindred rapport there.

After attending both public and private schools, she went to Kent State University, graduating with a degree in arts in telecommunications (broadcast journalism). She decided to follow in her father's footsteps and entered Yale University Divinity School. Completing her Masters Degree in 1983, Walker-Smith became the first African American woman to graduate from the Doctor of Ministry Program at Princeton Theological Seminary.

Currently, Walker-Smith serves as the Executive Director of the Church Federation of Greater Indianapolis. She is the first African American and first woman to do so. Walker-Smith has lived in three African countries and has traveled extensively throughout Africa and the world. Her journalism background is serving her well as the host of Faces of Faith on PAX Television Network, a co-host on the Odyssey Hallmark Cable Network and a columnist for the Indianapolis Star-News newspaper.

As the Executive Director of the Church Federation of Greater Indianapolis, Walker-Smith works to stop violence in the inner city. Walker-Smith organizes prayer vigils around this issues, but believes that racial and economic issues are at the heart of violence. She has also spoken at the Indiana Women's Prison since 1991.

See how Reverend Dr. Angelique Walker-Smith is related to other HistoryMakers
Donate Now
Click Here To Explore The Archive Today!