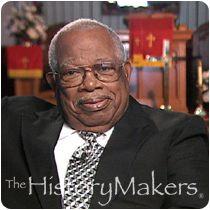 See how Reverend Curtis Harris is related to other HistoryMakers

Curtis West Harris was born on July 1, 1924 in Denron, Virginia. His father left the family when he was a young boy and his mother moved the family to Hopewell, where she worked as a domestic. There, Harris earned his high school diploma from Carter G. Woodson High School in 1944. After graduation, he went to work for a cotton plant called Hercules. Knowing he wanted more out of life, he convinced his older sister to pay for tuition at Virginia Union University in Richmond.

Harris attended Virginia Union from 1945 until 1946, when he married his high school sweetheart. The young couple moved to Norfolk but soon returned to Hopewell where he began working as a janitor at Allied Chemical. During this time Harris became active in the civil rights movement. In 1959, he became the pastor of Union Baptist Church.

Harris was active in the Southern Christian Leadership Conference (SCLC). He participated in the famous march from Selma to Montgomery and volunteered to serve as a human shield for Martin Luther King, Jr., during the march. In 1963, he successfully fought the Ku Klux Klan and the city of Hopewell to prevent the city from building a landfill in the African American community. In 1964 Harris' two sons helped integrate Hopewell High School.

He continues to work vigorously on civil and human rights issues in Virginia. He is a member of the U.S. Commission on Civil Rights. In 2004, Harris' formerly segregated school, Carter G. Woodson, named a library in his honor.

See how Reverend Curtis Harris is related to other HistoryMakers
Click Here To Explore The Archive Today!