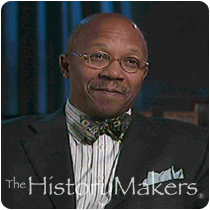 Reverend Charles R. Stith, who serves as the director of the African Presidential Archives and Research Center at Boston University, was born in St. Louis, Missouri, on August 26, 1949. Stith attended public schools in St. Louis, graduating from Charles Sumner High School in 1966. After two years at a junior college, Stith attended Baker University in Baldwin, Kansas, graduating in 1973. Two years later, Stith received his master’s of divinity degree from the Interdenominational Theological Center in Atlanta, Georgia. Stith earned his master’s degree in theology from the Harvard University Divinity School in Cambridge, Massachusetts, in 1977.

By the time he was thirty, Stith was the senior minister at Union United Methodist Church in Boston; the youngest person ever appointed senior minister at the church. In 1985, while still serving as pastor at Union United, Stith founded the Organization for the New Equality (ONE), a non-profit organization with the goal of generating economic opportunity for women and people of color. Stith’s efforts led to the first comprehensive community reinvestment agreement in the country, a $500 million package for communities in Massachusetts. Stith was also involved with restructuring the Community Reinvestment Act, resulting in additional credit and capital for low and moderate-income communities of color.

After leading ONE for thirteen years, Stith was appointed by President Clinton as ambassador to Tanzania; his tenure as ambassador starting one month after the August 1998 bombing of the United States embassy in Dar es Salaam. Stith is credited with leading the embassy through its recovery; after his time in Tanzania, he founded the African Presidential Archives and Research Center (APARC) at Boston University.

Stith has received a number of awards and special appointments during the course of his career, including an honorary doctorate from his alma mater, Baker University. Also, in 1994, President Clinton appointed Stith to the official delegation to monitor the South African election. In 2001 former Senate Majority Leader Tom Daschle appointed Stith to the U.S. Commission on International Religious Freedom.

Stith and his wife, researcher and administrator at the Harvard School of Public Health, Dr. Deborah Prothrow-Stith, have raised two children: Percy and Mary.

See how Reverend Charles Richard Stith is related to other HistoryMakers
Donate Now
Click Here To Explore The Archive Today!