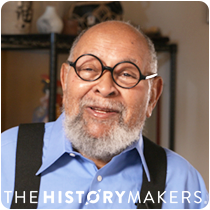 See how Reverend Cecil Williams is related to other HistoryMakers

Religious leader Reverend Cecil Williams was born on September 22, 1929 in San Angelo, Texas. Williams earned his B.A. degree in sociology from Huston-Tillotson University in Austin, Texas in 1952, and graduated from the Perkins School of Theology at Southern Methodist University in Dallas, Texas in 1956, where he was among the first five African Americans to graduate from Perkins School of Theology.

He served as a pastor in Hobbs, New Mexico, and in Kansas City, Missouri until 1963, and accepted a position as pastor at Glide Memorial Church in San Francisco, California. In 1964, Williams, Phyllis Lyon, and Del Martin founded the Council on Religion and the Homosexual. In addition to providing the LGBTQ community a safe place at Glide, Williams protested the de facto segregation of San Francisco public schools, hosted events for the Black Panther Party, supported Angela Davis by hosting “Free Angela Davis” rallies, and demanded investigations of police brutality against African Americans in the Bay Area. He created Citizens Alert, a community group investigating allegations of police intimidation and brutality against people of color and the gay community. Williams grew the congregation to 10,000 members and in 2000, he retired as pastor at Glide Memorial, but remained central to church operations as the Minister of Liberation and CEO of the Glide Foundation.

At the request of Coretta Scott King, Williams became the chairman of the Northern California Dr. Martin Luther King, Jr. Birthday Observance Committee in 1986. In 2008, Williams was the recipient of the National Caring Award presented by the Caring Institute in Washington, D.C. In August 2013, the intersection where Glide Memorial Church was renamed “Rev. Cecil Williams Way” in his honor. Williams and wife, Janice Mirikitani, appeared as extras in the 2006 film The Pursuit of Happyness and he was also featured in the PBS documentary series This Far by Faith. Williams authored two books; I’m Alive: An Autobiography published in 1980, and collaborated with his wife to publish Beyond the Possible in 2013.

Williams has two children from his first marriage, Albert and Kim.

Revered Cecil Williams was interviewed by TheHistoryMakers on December 1, 2017.

See how Reverend Cecil Williams is related to other HistoryMakers