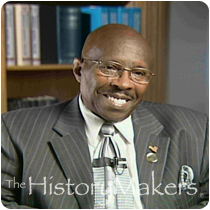 Civil rights activist and pastor Rev. Calvin Wallace Woods, Sr. was born on September 13, 1933, in Birmingham, Alabama to Maggie Rosa Lee Wallace Woods, a homemaker, and Abraham Lincoln Woods, Sr., a plant worker and Baptist minister. Woods entered Parker High School at age twelve, where he discovered and developed a skill for shoe repair, tailoring and a gift for public speaking. He graduated in 1950, with a partial scholarship to Miles College.

Throughout the years, Woods would attend the Universal Baptist Institute, the Universal Baptist Seminary and Birmingham-Easonian Baptist Bible College. He holds a B.S. degree in social science, B.D., B.R.E., M.B.S. and D.D. degrees. Woods, his brother, Reverend. Abraham L. Woods, Jr. and Reverend. Fred L. Shuttleswoth co-founded the Alabama Christian Movement for Human Rights (ACMHR) in 1956. The Woods brothers were introduced to Reverends Martin Luther King, Jr. and Ralph Abernathy in 1962, when they began working closely with the ACMHR.

In 1960, at the age of twenty-seven, Woods served as pastor for East End Baptist Church. He was arrested and convicted for advocating boycotts of Birmingham’s segregated city bus system. He was sentenced to prison for six months and fined, becoming the first member of the Woods family to be arrested for their participation in the Civil Rights Movement. Woods continued fighting segregation and was heavily involved in the Civil Rights Movement, and in 1963, Woods was arrested and beaten by the police for his participation in public protests. The same year, Woods joined the March on Washington. In 1965, Woods protested Birmingham’s voter registration procedures under the leadership of Reverend Edward Gardner, and one year later Woods worked as the strategy chairman for the protest of the shootings of five black protesters at a Birmingham supermarket.

In 2006, at the age of seventy-two, Woods succeeded his brother Abraham as President of the Birmingham SCLC, and became president of the New Era Baptist State Convention a year later. Woods is currently the leader of Shiloh Baptist Church and leads a group called the Prayer Intercessors.

Reverend Calvin Wallace Woods Sr. was interviewed by The HistoryMakers on September 7, 2007