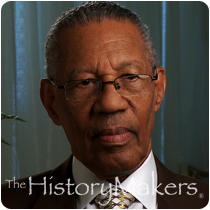 Favorite Color:
Red
Favorite Food:
Steak
Favorite Vacation Spot:
Close to Home
Favorite Quote:
It Is What It Is.

Favorite Color:
Red
Favorite Food:
Steak
Favorite Vacation Spot:
Close to Home
Favorite Quote:
It Is What It Is.

See how Reverend Bill Lawson is related to other HistoryMakers

Reverend William Lawson is a retired pastor and the namesake of an Institute focused on helping the community. He was born on June 28, 1928 in St. Louis, Missouri to Walter and Clarisse Lawson. Raised in Kansas City, Kansas, Lawson attended Summer High School and graduated with his B.A. degree from Tennessee A and I state University in 1950. While at Central Baptist Theological Seminary he married Audrey Lawson. He then graduated in 1955 and received his Master of Theology and his Bachelor of Divinity degrees majoring in New Testament Interpretation while holding an appointment as a Teaching Fellow in Homiletics.

From 1960 to 1970, Lawson served as the director of the Baptist Student Union and a professor of Bible at Texas Southern University. While at Texas Southern University, Lawson helped build the first Afro-American Studies Program at the University of Houston and taught classes in sociology and the Black Church. His involvement with the Civil Rights Movement began when fourteen TSU students held a sit-in protesting segregation at a lunch counter. After founding the Wheeler Avenue Baptist Church, Lawson invited the Reverend Martin Luther King Jr. to speak at his church in 1963. Lawson served as a pastor for over thirty years. In honor of his dedication to the community, the community created a non-profit organization called the William A. Lawson Institute for Peace and Prosperity. Through the organization, Lawson brought attention to the oldest African American cemetery in Houston, helped created The Main Street Coalition, and founded the WALIPP Preparatory Academy for boys. The Academy was the first charter school created for boys grades six through eight in the U.S. The Institute also houses a Seniors Residence for independent-living adults.

Lawson headed the Houston chapter of the Southern Christian Leadership Conference for over three decades. In 1968, he received his honorary Doctor of Divinity degree from Howard Payne University and in 1993 he received his honorary Doctor of Humane Letters degree from the University of Houston. For his outstanding work with the Boy Scouts and his organization of the area’s largest scouting program, in 1991 Lawson was given the Silver Beaver Award. Lawson is also the author of Lawson’s Leaves of Love: Daily Meditations, published in 2004.

William A. Lawson was interviewed by The HistoryMakers on May 11, 2010.

See how Reverend Bill Lawson is related to other HistoryMakers
Click Here To Explore The Archive Today!