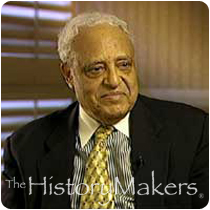 Favorite Time of Year:
Fall
Favorite Quote:
In all thy ways acknowledge God, and He will direct thy path.

Favorite Time of Year:
Fall
Favorite Quote:
In all thy ways acknowledge God, and He will direct thy path.

Lifelong civil rights activist the Reverend Benjamin L. Hooks was born in Memphis, Tennessee, on January 31, 1925. At an early age, Hooks was inspired to excel in his education, largely due to the influence of his grandmother, who was the second black woman in the United States to graduate from college. Hooks's education took him to LeMoyne College in Tennessee, which he attended from 1941 to 1943. In 1943, Hooks transferred to Howard University and joined the Army, where he guarded Italian prisoners of war. Graduating from Howard in 1944, Hooks went to DePaul University in Chicago for his J.D. degree, completing the program in 1948.

Facing racism everywhere he went, Hooks began to fight to change the problems he encountered. Hooks returned to Memphis after law school and set up his own practice, quickly establishing a reputation for himself. After joining the Southern Christian Leadership Conference, Hooks was ordained as a minister in 1956, and began preaching, in addition to his duties as a lawyer. In 1965, after a few failed election bids, Hooks was appointed to fill a vacancy on the Tennessee criminal court judicial bench, becoming the first African American to serve on the criminal court in Tennessee. Never one to slow down, Hooks also produced several television shows in the area, and his support of President Richard Nixon brought about his appointment as the first African American on the Federal Communications Commission in 1972. When Hooks left the FCC, he was almost immediately voted in to serve as the executive director of the NAACP, where he served from 1977 until 1992. In the early 1990s, Hooks and his family were among the targets of a series of racially motivated bombings; these events, combined with the difficult task of managing an organization the size of the NAACP, led him to retire. Following his departure from the NAACP, Hooks taught at Fisk University as a professor of social justice.

Later on, the University of Memphis established the Benjamin L. Hooks Institute for Social Change, to house symposia and archives on civil rights. Hooks was awarded several honorary degrees and human rights awards, and was honored by Congress. Hooks and his wife, Frances, were married in 1951; the couple raised one child. On March 24, 2001, Benjamin and Frances Hooks renewed their wedding vows to celebrate nearly fifty years of marriage. Hooks passed away on April 15, 2010.

See how Reverend Benjamin Hooks is related to other HistoryMakers
Donate Now
Click Here To Explore The Archive Today!