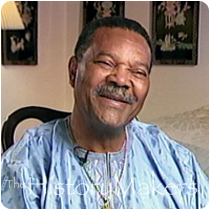 See how Reverend B. Herbert Martin, Sr. is related to other HistoryMakers
Donate Now

Activist and pastor Reverend B. Herbert Martin was born December 28, 1942, in the historic all-black town of Mound Bayou, Mississippi. He attended Mound Bayou Training School. Martin was set back in his senior year when he was severely beaten by local white thugs, and graduated from Mound Bayou High School in 1963. Martin earned a B.A. from Philander Smith College in 1967, studied at Payne Theological Seminary before receiving a master’s of divinity from Garrett Theological Seminary in 1970.

Martin served as pastor Sherman, Clair Christian, Gresham, and St. Mark United Methodist churches from 1968 to 1979. He then became the pastor of The Progressive People’s Community Center – The People’s Church where he still presides.

Martin joined the NAACP as a child under the Mississippi state leadership of Dr. T.R.M. Howard. As president and executive director of the Chicago South Side NAACP, Martin led the largest branch in the nation. He served as chairman of the Chicago Housing Authority, and as executive director of the Chicago Commission on Human Relations. Martin is active in many religious and civic activities such as the boards of Christian Laity of Chicago, One Church One Child, the Million Man March – Chicago Organizing Committee, and Operation PUSH. In 1999, Martin attempted to heal racial tensions caused by the baseball bat beating of a black youth by white teens in Chicago’s Bridgeport community.

He is probably best known as the pastor of late Chicago Mayor Harold Washington. Martin lives in Chicago where he has two daughters and a son. For his outreach activities in El-Mina, Ghana he was awarded the name, Kojo Oyeadizie.

See how Reverend B. Herbert Martin, Sr. is related to other HistoryMakers
Donate Now
Click Here To Explore The Archive Today!