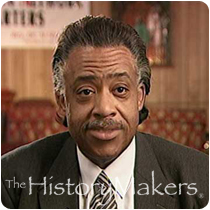 See how Reverend Al Sharpton is related to other HistoryMakers

Born in Brooklyn, New York, on October 3, 1954, Reverend Alfred "Al" Sharpton has been preaching since age four. He was licensed and ordained at age nine. In 1971, he founded the National Youth Movement and for seventeen years he led the organization, registering young people to vote and giving them job opportunities. His direct-action and civil disobedience campaigns have brought attention to injustice in many areas.

Sharpton has pursued other interests while continuing to preach: in his teens, he established a close bond with James Brown and developed a father-son relationship, eventually recording the record God Smiled on Me with him. In the 1970s and early 1980s, he worked as a youth organizer with boxing promoter Don King, while learning more about African American politics and entertainment.

However, Sharpton never strayed far from activism. He formed the National Action Network in 1991 to fight for progressive, people-based social policies by providing extensive voter education and registration campaigns, economic support for small community businesses and by confronting corporate racism. That same year, Sharpton was stabbed in a Bensonhurst school yard. This represented a turning point for him. Eventually, he met and reconciled with his attacker.

Sharpton has never hesitated to act in support of African Americans, from individuals seeking public offices to Abner Louima, a Haitian immigrant brutalized by Brooklyn police in 1997. Now he is also seeking to build a national multi-cultural, multi-racial movement addressing a range of issues. To that end, in 1999 Sharpton, former New York City Mayor Ed Koch and Harvard Law School professor Charles Ogletree formed "Second Chance", a program to serve non-violent felony offenders after their release from prison. Sharpton also orchestrated a massive protest when police shot unarmed Amadou Diallo 42 times in 1999. In 2001, Sharpton protested the U.S. Navy's bombing of the Puerto Rican island of Vieques. Attempting to fight injustice wherever he finds it, Sharpton is following in the footsteps of Reverend Martin Luther King, Jr. and Reverend Jesse Jackson Sr.

See how Reverend Al Sharpton is related to other HistoryMakers
Click Here To Explore The Archive Today!