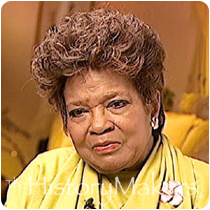 Addie L. Wyatt was born on March 8, 1924, in Brookhaven, Mississippi. The oldest girl of eight children, Wyatt (then Cameron) looked to her mother, Maggie Cameron, as an example. When Wyatt was only three, she gave her first recitation in church. This began a career in public speaking which reaches through religion to human rights, which represents a lifetime of work in which her actions speak even louder than her powerful words.

Wyatt is one of the nation's foremost labor leaders. She was the first female local union president of the United Packinghouse Food and Allied Workers. She began working for the Amalgamated Meat Cutters and Butcher Workmen of North America in 1941 and became the organization's first female international vice president. She and her husband, Dr. Claude Wyatt, Jr., founded the Wyatt Choral Ensemble in 1944. Wyatt was ordained in 1955 and the next year the Wyatts began working closely with Dr. Martin Luther King, Jr. They helped found Operation Breadbasket and serve on the board of Operation PUSH, People United to Serve Humanity.

Wyatt believes in a holistic Gospel and that all things are connected, and this can be seen in her work. Wyatt served as the director of the women's affairs and human rights departments in the Amalgamated Meat Cutters union. Eleanor Roosevelt appointed her to serve on the Labor Legislation Committee of the Commission on the Status of Women, which presented its report in 1963. In 1974, she helped found the Coalition of Labor Union Women and delivered the keynote address at the founding meeting to 3,200 participants. Wyatt was a founding member of the National Organization for Women and a leader in the struggle for an Equal Rights Amendment.

Today, Wyatt serves as co-pastor of Vernon Park Church of God in Chicago, Illinois. The church, which Wyatt and her husband helped found, has approximately 1,000 members and is widely know for its work with homeless people, seniors and youth. She works for peace and has supported worthy political candidates. She was named one of Time Magazine's Women of the Year in 1975 and received a similar honor from The Ladies Home Journal in 1977. Ebony named her one of the 100 most influential black Americans from 1980 to 1984.

See how Reverend Addie Wyatt is related to other HistoryMakers
Donate Now
Click Here To Explore The Archive Today!