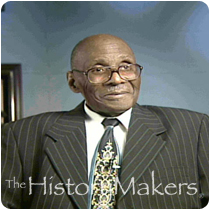 See how Reverend Abraham Woods, Jr. is related to other HistoryMakers
Donate Now

Reverend Abraham Lincoln Woods, Jr. was born on October 7, 1928 to Maggie and Abraham Woods, Sr. in Birmingham, Alabama. Woods attended Parker High School and was given a scholarship to attend Morehouse College. Completing one year at Morehouse, Woods became ill and returned home. During this time, he acknowledged his call to the ministry. Woods received his B.A. degree in theology from the Birmingham Baptist College, his B.A. degree in sociology from Miles College in Birmingham, and his M.A. degree in American history from the University of Alabama. He also completed all the credits needed for his Ph.D.

Woods became a charter member of the Alabama Christian Movement and served as the vice president alongside Rev. Fred L. Shuttlesworth. He served as the director for the Miles College Voter Registration Project and would later become President of the Birmingham Southern Christian Leadership Conference (SCLC).

Woods led the first sit-in at a department store in Birmingham and was jailed for five days. In the summer of 1963, he worked for Dr. Martin Luther King, Jr. as the deputy director for the Southeast and helped to mobilize the historic March on Washington. He was often asked to speak on behalf of Dr. King because of his oratorical skills.

Woods would later recruit African Americans, especially those with prior military police experience to take the exam for the Birmingham Police Department. He and Dr. Jonathan McPherson assisted them in preparing for the test.

In 1968, Woods was the first African American to teach American history at the University of Alabama. He lectured on Dr. King’s non-violent and conflict resolution philosophy. Woods served for forty years as a faculty member at Miles College. He retired in 2002, and Miles College conferred upon him the Doctorate of Humane Letters.

Woods has been the pastor of St. Joseph’s Baptist Church in Birmingham for thirty-seven years. He is a member of the Trustee Board of Birmingham Bible College, the Baptist Ministers’ Conference, the United States Capital Historical Society and Phi Delta Kappa.

Woods was interviewed by The HistoryMakers on March 23, 2007.

See how Reverend Abraham Woods, Jr. is related to other HistoryMakers
Donate Now
Click Here To Explore The Archive Today!