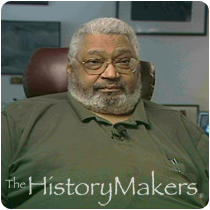 See how Reuben R. McDaniel is related to other HistoryMakers

McDaniel was first employed as a mechanical designer at the Government and Industrial Division of Philco Corporation from 1956 to 1960. In 1965, McDaniel began his work in education at Baldwin-Wallace College Learning Center where, as the only African American in the administration, he held the positions of Director for Division of Educational Services, Assistant to the Dean, and Assistant Professor of Education. After leaving Baldwin-Wallace College, McDaniel held several positions over the years at the University of Texas-Austin, including Dean of Students (1972-73), Assistant Professor of Management (1972-75), and Associate Professor of Management (1975-1981). For six months in 1979, McDaniel served as Acting Deputy Commissioner for Medical Programs for the Texas Department of Human Resources. McDaniel served as Professor of Management Science and Information Systems for the University of Texas-Austin, in addition to being Adjunct Professor in the Department of Medicine and the Department of Radiation Oncology at the University of Texas Health Center in San Antonio. Over all, McDaniel accumulated over thirty-eight years experience in university education and administration.

As an expert in complexity science, McDaniel received numerous awards and recognitions, including Fellow at the IC2 Institute, and Outstanding Professor of the McCombs School of Business. McDaniel served on and chaired multiple university committees and councils, and held various leadership positions on community committees. McDaniel authored two books, The Uncertainty and Surprise in Complex Systems and Organizations: An Information Systems Perspective, completed chapters in thirteen books and wrote more than sixty articles.

McDaniel passed away in February 2016.

See how Reuben R. McDaniel is related to other HistoryMakers
Click Here To Explore The Archive Today!