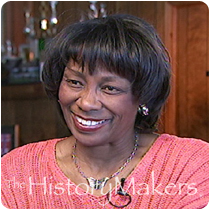 Favorite Color:
Red
Favorite Food:
Meatloaf
Favorite Time of Year:
Fall, Spring
Favorite Quote:
I Can Do All Things Through Christ That Strengthens Me.

Favorite Color:
Red
Favorite Food:
Meatloaf
Favorite Time of Year:
Fall, Spring
Favorite Quote:
I Can Do All Things Through Christ That Strengthens Me.

See how Renee Powell is related to other HistoryMakers

Professional golfer and educator Renee Powell is one of only three African American women to ever play on the Ladies Professional Golf Association's (LPGA) Tour. She is the daughter of William Powell, owner of the Clearview Golf Course in Canton, Ohio, the first such facility designed, constructed, owned and operated by an African American. Renee Powell graduated from high school in Canton in 1964 and attended Ohio University and Ohio State University.

She began competing as a golfer at age twelve, and continued perfecting her game during her college years. She made her professional debut on the LPGA Tour in 1967, and her first tournament was the U.S. Women's Open conducted by the United States Golf Association. In 1980, when she finished competing on the Tour, she taught golf in Africa and Europe and later returned home to Canton where she currently serves as the head professional golfer at Clearview Golf Course. In 2000, Clearview Golf Course was named to the National Register of Historic Places by the U.S. Department of the Interior.

The Powell family established the Clearview Legacy Foundation for education, preservation and turf grass research. In 2003, Renee Powell received the First Lady of Golf Award from the Professional Golfers' Association. In 2007, she received the first Rolex "For the Love of the Game" Award.

See how Renee Powell is related to other HistoryMakers
Click Here To Explore The Archive Today!