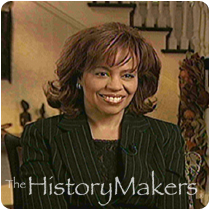 See how Renee Ferguson is related to other HistoryMakers

TV journalist and investigative reporter Renee Ferguson was born on August 22, 1949 in Oklahoma City, Oklahoma to Eugene and Mary Ferguson. Attending Edwards Elementary School, Ferguson graduated from Frederick Douglass High School in 1967. At Indiana University, she covered the student unrest at Jackson State and Kent State Universities and worked as a Washington Post student intern during the summer of 1970. Ferguson earned her B.S. degree in journalism in 1971.

Ferguson worked in Indianapolis, Indiana as a writer for the Indianapolis Star newspaper and then as a news reporter for television station WLWI-TV. When she joined Chicago’s WBBM-TV in 1977, she became the first African American woman to work as an investigative reporter in Chicago. In 1980, she worked as a network news correspondent for CBS News in New York City and Atlanta. Ferguson returned to Chicago in 1987, joining the UNIT 5 investigative team at NBC affiliate WMAQ-TV.

Ferguson has reported on many issues including strip searches of women of color at O’Hare Airport by United States Customs officials; sexual harassment at Chicago’s Ford Motor Plant; the deaths of children involved in a clinical drug trial; a high school undercover investigation of drug and alcohol abuse and gun and drug sales held in the property room of the Gary, Indiana police department.

A recipient of seven Chicago Emmy Awards, the DuPont Award, the Gracie Award, the Associated Press Award for Best Investigative Reporting and many other accolades, Ferguson lives with her husband Ken Smikle and their son in Chicago’s Kenwood neighborhood.

Sponsored by Ed and Bettiann Gardner

See how Renee Ferguson is related to other HistoryMakers
Click Here To Explore The Archive Today!