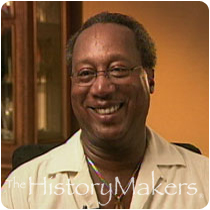 See how Renault Robinson is related to other HistoryMakers
Donate Now

Renault A. Robinson was born on September 8, 1942, in Chicago, Illinois, to Mabel and Robert Robinson. He performed a leading role in founding the African American Patrolman's League. Robinson is known for successfully bringing a civil rights lawsuit against the Chicago Police Department for discrimination against African Americans and Latinos. His work was instrumental in increasing the numbers of minority Chicago police officers.

After graduating from Hyde Park High School in 1960, Robinson joined Chicago's police force in 1964. His superiors recognized him as bright and respectful. However, this attitude towards him changed in the wake of the riots that followed Dr. Martin Luther King Jr.'s assassination in 1968. The brutality of the Chicago police caused Robinson and other black officers to form the Afro-American Patrolman's League. Although he felt persecuted by senior officers, Robinson continued to work for the Chicago police. During this time he served the National Black Police Association as a national information officer. In 1983, he left the police force to become chairman of the Chicago Housing Authority under the administration of Mayor Harold Washington.

Robinson pursued a business career in 1989 when he went to work as the vice president of ASI Personnel Service. In 2000, he founded his own temporary staffing agency, Renault Robinson Staffing. Robinson holds a bachelor's degree from Chicago's Roosevelt University. He and his wife, Annette, have four children: Renault, Jr.; Brian; Kivu; and Kobie.

See how Renault Robinson is related to other HistoryMakers
Donate Now
Click Here To Explore The Archive Today!