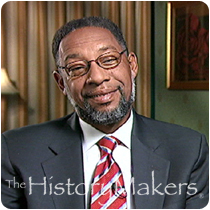 See how Reginald Webb is related to other HistoryMakers
Donate Now

Businessman and McDonald’s franchisee Reginald “Reggie” Webb was born in South Bend, Indiana, on March 25, 1948. Growing up, Webb went to the South to live with his great-grandparents for a year to help on their farm in 1958. In 1959, he moved with his grandmother to California, settling in South Central Los Angeles. While attending high school at Manual Arts, Webb was mentored by his minister, the Reverend T.M. Chambers, and by an elderly Jewish woman his grandmother worked for named Sally Smalley.

In 1966, Webb joined the U.S. Coast Guard, serving until 1969. In the Coast Guard, Webb was first stationed in Connecticut, and later served in California during the peace movement of the 1960s, as well as the assassination of Dr. King and the emergence of the Black Panthers. After his honorable discharge from the Coast Guard, Webb attended California State University in Los Angeles, where he studied political science. While attending school, he also became involved with the War on Poverty. In 1973, Webb joined the accelerated management development program of McDonald’s, and after spending time training in the restaurants, he was moved into the corporate division. After holding numerous positions with the company, Webb decided to become a franchisee in 1985, largely due to his desire to stay in Southern California. He started with two franchises in Pomona, California, and today he operates eleven restaurants in Southern California.

In addition to his franchises, Webb is the chairman of the National Leadership Council for McDonald’s owner/operators, an organization that encompasses 11,000 of the nation’s 13,000 McDonald’s restaurants. Additionally, he served as the chairman and CEO of the National Black McDonald’s Operators Association from 1994 to 1997, where he was instrumental in helping more African Americans to become franchisees. In 2004, Webb was honored with the 365Black award from McDonald’s.

See how Reginald Webb is related to other HistoryMakers
Donate Now
Click Here To Explore The Archive Today!