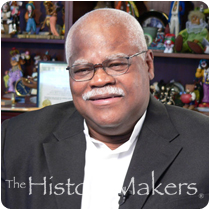 Favorite Color:
Black
Favorite Food:
Fried Chicken, Macaroni and Cheese
Favorite Quote:
Nobody Can Make You Inferior Without Your Consent.

Favorite Color:
Black
Favorite Food:
Fried Chicken, Macaroni and Cheese
Favorite Quote:
Nobody Can Make You Inferior Without Your Consent.

See how Reginald Weaver is related to other HistoryMakers

Reginald Lee Weaver was born on August 13, 1939 in Danville, Illinois to Mary Alice Buchanan and Carl Weaver. Weaver graduated from Danville High School in 1957 and earned his B.A. degree in special education for the physically challenged at Illinois State University in 1961. He received his Masters degree from Roosevelt University in Chicago, Illinois in 1971.

He travels nationally and internationally, working tirelessly as an ambassador for public education and advocating for the basic right of every student to attend a great public school. In 2006, Weaver made a landmark visit to the Lincoln Cathedral in England – home to a very rare copy of the Magna Carta – that was met with widespread acclaim. In recognition of his commitment to democracy and fundamental freedoms, the Cathedral unveiled a stone column in Weaver’s name.

A recognized expert on public education issues, Weaver has testified before Congress on federal education policy and frequently provides a critical voice on public education for national publications, including The New York Times, USA Today and The Washington Post, along with decision-maker publications, such as Congressional Quarterly, Education Week, and Education Daily. Weaver regularly appears on such news programs as CNN Headline News, C-Span’s Washington Journal, and ABC World News Tonight. He has been invited to discuss pressing education issues on National Public Radio’s News & Notes with Ed Gordon, CNN Radio Network, AP Radio Network and others.

His commitment and contributions to public education haven’t gone unnoticed. He has been named one of Ebony magazine’s 100 Most Influential Black Americans for his national influence.

Weaver was interviewed by The HistoryMakers on August 2, 2007.

See how Reginald Weaver is related to other HistoryMakers
Click Here To Explore The Archive Today!