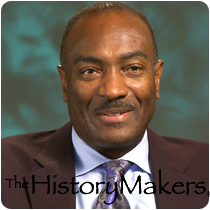 Favorite Color:
Blue
Favorite Food:
Gumbo
Favorite Time of Year:
Fall
Favorite Vacation Spot:
Paris, France
Favorite Quote:
The Two Most Important Days In Your Life Are The Day You Were Born And The Day You Understand Why.

Favorite Color:
Blue
Favorite Food:
Gumbo
Favorite Time of Year:
Fall
Favorite Vacation Spot:
Paris, France
Favorite Quote:
The Two Most Important Days In Your Life Are The Day You Were Born And The Day You Understand Why.

See how Reginald Van Lee is related to other HistoryMakers

Management consultant Reginald Van Lee was born on May 8, 1958 in Houston, Texas to Tommie Lee and Eva Elnora Jefferson Lee. Van Lee received his B.S. degree in engineering from Massachusetts Institute of Technology (MIT) in 1979; and, in 1980, he earned his M.S. degree in civil engineering from MIT. Upon graduation, Van Lee was hired by Exxon Production Research Company as a research engineer. In 1982, he entered the M.B.A. program at Harvard Business School, and he interned at Booz Allen Hamilton during the summer of 1983. In 1984, after graduating with his M.B.A. degree in business administration, Van Lee was hired at Booz Allen Hamilton.

In 1993, Van Lee was promoted to partner at the Booz Allen Hamilton; and in 2003, he was promoted to senior partner. Van Lee leads Booz Allen Hamilton’s health and not-for-profit businesses, where he has helped numerous private and public health organizations and not-for-profit organizations, such as Habitat for Humanity and the American Cancer Society. As an industry expert on strategy implementation, Van Lee has contributed a number of articles on the topic. His articles have appeared in The Journal of Business Strategy and Business Horizons. Van Lee also co-authored the book, Megacommunities: How Leaders of Government, Business, and Non-Profits Can Tackle Today’s Global Challenges Together. He has appeared on ABC-TV’s “World News This Morning” and CNBC, and co-led the Urban Enterprise Initiative with the William Jefferson Clinton Foundation, where he focused on driving enhanced competitiveness for small businesses in Harlem. Van Lee is also a founding member of the Clinton Global Initiative.

Van Lee’s many recognitions include the 2008 Black Engineer of the Year Award and New York University’s C. Walter Nichols Award for community service. He was also chosen as one of the 2009 Washington Minority Business Leaders by the Washington Business Journal. Van Lee served as chairman emeritus of the board of the Evidence Dance Company, trustee of the Studio Museum in Harlem, and chairman of the Washington Performing Arts Society. In 2008, he was appointed by President Barack Obama to the President’s Committee on the Arts and the Humanities.

Reginald Van Lee was interviewed by The HistoryMakers on September 14, 2012.

See how Reginald Van Lee is related to other HistoryMakers
Click Here To Explore The Archive Today!