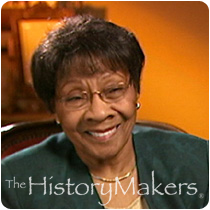 See how Regina Williams is related to other HistoryMakers

Healthcare provider and educator Regina Sallee Williams was born in Sandusky, Ohio on April 20, 1931, to Cora Nell Collier Sallee and Charles Louis Sallee. She attended the public schools of Sandusky and graduated from Sandusky High School in 1949. Williams graduated from Ohio’s Mount Carmel School of Nursing in 1952, and received a bachelor’s of science degree in nursing from The Ohio State University in 1955. She later earned a master’s of science in nursing from Wayne State University and a Ph.D. in higher education administration from the University of Michigan.

Williams served as a first lieutenant in the United States Army Nurse Corps (ANC) stationed at El Paso, Texas. After returning to Columbus from the ANC, she taught at The Grant Hospital School of Nursing. She moved to Detroit, Michigan in 1966, and taught at Mercy School of Nursing from 1966 until 1973. In 1974, she became an assistant administrator in the Department of Health Careers at Schoolcraft College of Livonia, Michigan. In 1977, Williams was recruited to Wayne State University, College of Nursing, where she held teaching and administration posts and developed an innovative program (Outreach BSN) for employed associate degree registered nurses interested in baccalaureate education. She was serving as interim assistant dean when she left Wayne State University in August 1990 to accept an appointment as the head of the department of nursing at Eastern Michigan University in Ypsilanti, Michigan, where she served until her retirement in 2001.

Williams has worked with and held numerous leadership positions in professional organizations, including Michigan Nurses Association. She served as President of the Michigan Association of Colleges of Nursing (MACN) Dean’s group, as a member and eventually chair of the Michigan Board of Nursing. Williams has done research and has published on the subject of mentoring and on nursing education.

Williams lives in Detroit, Michigan. She remains active in nursing as a consultant through writing, attendance at conferences and by sitting on several community advisory boards.

See how Regina Williams is related to other HistoryMakers
Click Here To Explore The Archive Today!