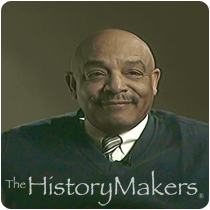 See how Reed Kimbrough is related to other HistoryMakers

Reed D. Kimbrough is the Director of Diversity Programs and Community Relations for Cox Communications’ Atlanta Journal-Constitution (AJC). Kimbrough manages employee development and training at the Atlanta Journal-Constitution. He is the eldest of three children of retired United States army officer William Reed and Ernestine Willis Kimbrough. Born in Selma, Alabama, on February 27, 1951, Kimbrough spent his formative years between West Germany and the southern United States.

Upon his return to the United States, Kimbrough graduated from high school in Fort Knox, Kentucky and entered Eastern Kentucky University where he graduated with a degree in business administration. In his second year at Eastern, he was instrumental in starting the first chapter of Kappa Alpha Psi Fraternity, Inc. He served in the United States Army and rose to the rank of captain with his primary duties in the 101st Airborne Division as a helicopter pilot. He is a retired Major of the U.S. Army Reserves.

Kimbrough joined the Atlanta Journal-Constitution in the news circulation department. He was promoted to the production department where he managed building services, shipping, receiving, packaging, distribution and management-level employee development. He currently holds the position as Director of Diversity Programs and Community Relations.

Kimbrough is active in various organizations including the National Association for the Advancement of Colored Peopled (NAACP), the National Association of Minority Media Executives (NAMME), the Celebrate Life Foundation, Hands on Atlanta, Habitat for Humanity, and the Georgia Hispanic Chamber of Commerce. He serves on the board of Men Stopping Violence and is a long term member of Kappa Alpha Psi Fraternity, Inc.

Kimbrough is married to Charlcye R. Kimbrough and is the father of Anthony M. Kimbrough.

See how Reed Kimbrough is related to other HistoryMakers
Click Here To Explore The Archive Today!