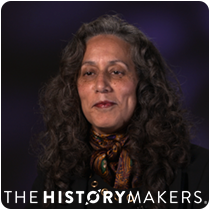 See how Rebecca Ford Terry is related to other HistoryMakers

Lawyer Rebecca Ford Terry was born on January 11, 1959 in Gary, Indiana to Dorothy and Frederick C. Ford, vice president and chief financial officer of Draper and Kramer. Terry graduated from Wirt High School in 1976, and received her B.A. degree in history from Harvard University in 1980. She then earned her J.D. degree from the University of Chicago Law School in 1984, and clerked for Judge Harry D. Leinenweber of the Northern District of Illinois and Judge William S. White of the Illinois Appellate Court. In 2008, Terry earned her L.L.M. degree in real estate from John Marshall Law School.

From 1989 to 1994, Terry worked as an attorney at White & Case LLP; and from 1995 to 1998, she served as vice president of litigation and intellectual property at Metro-Goldwyn-Mayer. Terry became the president of Isonford Intermedia and acting director of emerging domestic markets for the Milken Institute in 1998. In 2000, she joined Urban Entertainment, where she served as general counsel until 2002, when she became the senior vice president, general counsel, and corporate secretary at Draper & Kramer. In 2010, Terry was named associate general counsel for the City Colleges of Chicago, a position she held until 2013, when she became managing attorney at the Chicago office of the Hardwick Law Firm. In 2017, Terry accepted a counsel position at Scharf Banks Marmor LLC. In addition to her legal career, Terry began writing a movie review column in the Chicago Daily Law Bulletin in 2017. Her movie, book and theater reviews have also been published in the Chicago Reporter, Chicago Tribune, The New York Law Journal, and The Milken Institute Review.

Terry served on the board of directors of numerous organizations, including the Field Museum of Natural History, the Chicago Humanities Festival and the Heartland Society as well as the advisory board of African American Legacy. She also served as co-chair of the Leadership Advisory Committee at the Art Institute of Chicago, and as a trustee of the Goodman Theater. Terry held memberships at the Chicago Bar Association, the National Association of Bond Lawyers and the National Association of Women Lawyers.

Rebecca Ford Terry was interviewed by The HistoryMakers on February 24, 2018.

See how Rebecca Ford Terry is related to other HistoryMakers