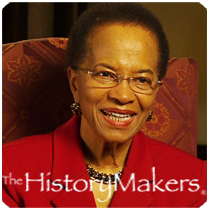 Favorite Color:
Red
Favorite Food:
Greens (Collard)
Favorite Time of Year:
Spring
Favorite Vacation Spot:
Home
Favorite Quote:
Do your best to present yourself to God as one approved. A worker who does not need to be ashamed and who correctly handles the word of truth. - Bible verse, second Timothy 2:15.

Favorite Color:
Red
Favorite Food:
Greens (Collard)
Favorite Time of Year:
Spring
Favorite Vacation Spot:
Home
Favorite Quote:
Do your best to present yourself to God as one approved. A worker who does not need to be ashamed and who correctly handles the word of truth. - Bible verse, second Timothy 2:15.

Chemist and corporate executive Reatha Clark King was born on April 11, 1938 in Pavo, Georgia. She moved with her mother to Moultrie, Georgia after her parents separated when King was in elementary school. The daughter of poorly-educated sharecroppers, King joined her family in the cotton fields throughout her childhood. King began her education in a one-room schoolhouse where she excelled in school. In 1954, King graduated as valedictorian from the Moultrie High School for Negro Youth. She then obtained a scholarship to Clark College in Atlanta, Georgia, earning her B.S. degree in chemistry and mathematics in 1958. King received a Woodrow Wilson fellowship to continue her studies at the University of Chicago. She earned her M.S. and Ph.D. degrees in physical chemistry in 1960 and 1963, respectively. Her Ph.D. thesis was entitled "Contributions to the Thermochemistry of the Laves Phases."

After earning her Ph.D. degree, King was hired by the National Bureau of Standards, becoming the agency’s first African American female chemist. As a research chemist, she won the Meritorious Publication Award for her paper on fluoride flame calorimetry. In 1968, King moved to New York City where she became an assistant professor at York College of the City University of New York in Jamaica, Queens. There, King quickly advanced her career, becoming associate dean for the Division of Natural Science and Mathematics in 1970, and associate dean for academic affairs in 1974. In 1977, King left York College to become the second president of Metropolitan State University in Minneapolis and St Paul, Minnesota. Prior to her departure from New York, King received her M.B.A. degree from Columbia University. After eleven years at Metropolitan State University, King was hired at General Mills in Minneapolis, Minnesota as executive director of the General Mills Foundation and vice president of the General Mills Corporation. She retired in 2002, but remained with General Mills for one additional year as chair of the board of directors. Since 1979, King has served on numerous corporate and nonprofit boards, including the Exxon Mobil Company, H.B. Fuller Company, Wells Fargo & Company, Minnesota Mutual Insurance Company, University of Chicago, American Council on Education and the Council on Foundations. In 2011, she began her service with Allina Health Systems as a corporate director. Currently, King also serves on the board of the National Association of Corporate Directors and is Emeritus Trustee of the University of Chicago.

She has received many awards for her achievements including National Association of Corporate Directors (NACD) Director of the Year, Defender of Democracy Award from the Washington, DC. Martin Luther King, Jr. National Memorial Project Foundation, Inc. and Exceptional Black Scientist Award from the CIBA-GEIGY Corporation and 14 honorary doctorate degrees. She is married to N. Judge King and they have two children, N. Judge King, III and Scott King.

Reatha Clark King was interviewed by The HistoryMakers on 01/16/2012.

See how Reatha Clark King is related to other HistoryMakers
Donate Now
Click Here To Explore The Archive Today!