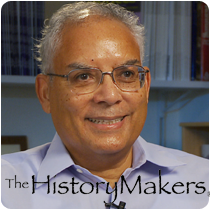 Favorite Food:
All Food
Favorite Time of Year:
Fall
Favorite Vacation Spot:
Europe
Favorite Quote:
Don't look back. Someone might be gaining on you.

Favorite Food:
All Food
Favorite Time of Year:
Fall
Favorite Vacation Spot:
Europe
Favorite Quote:
Don't look back. Someone might be gaining on you.

See how Raymond L. Johnson is related to other HistoryMakers
Donate Now

Mathematician Raymond L. Johnson was born on June 25, 1943 in Alice, Texas, a small town near Corpus Christi. He was raised by his mother Johnnie Johnson, his maternal grandmother Ethel Pleasant Johnson, and her second husband Benjamin Thompson. Growing up, it was Benjamin Thompson who taught Johnson how to read and do some arithmetic. This sparked an early interest in mathematics and allowed Johnson to skip the first two grades. Johnson attended a two room schoolhouse because the nearby grade school was segregated. With the help of his mentors, Larry O’Rear and Stan Brooks, Johnson excelled in high school mathematics. He went on to major in mathematics and received his B.A. degree from the University of Texas in 1963.

Once again, with the help and encouragement of a great mentor, Dr. Howard Curtis, Johnson applied and became one of the first African Americans to be admitted to Rice University. Two alumni sued the university to stop Johnson’s entrance, but within the year, Rice University won the case. Johnson became a regular student, graduating with his Ph.D. degree in mathematics in 1969. After college, Johnson started his forty year career at the University of Maryland in College Park, becoming the first African American faculty member in the mathematics department. He began as an assistant professor in 1968 and became a full professor in 1980.

Johnson served as chair of the graduate studies department at the University of Maryland from 1987 to 1990. As chair, he founded several programs to eliminate barriers for minority students and to help increase the number of minorities and women in the Ph.D. program in mathematics. He received a Distinguished Minority Faculty Award for his work. Johnson was promoted to chair of the mathematics department in 1991, a position he held for five years. Johnson’s mathematical work has focused in the area of harmonic analysis, the study of overlapping waves, which has roots in functions related to trigonometry. He has contributed to over twenty-five publications on mathematics research. Johnson’s current research focuses on applying harmonic analysis to study spectral synthesis. In 2007, Johnson was honored with the Mentor Award for Lifetime Achievement from the American Association for the Advancement of Science. In 2009, Johnson returned to Rice University to serve as a visiting professor. He has one son, Malcolm P. Johnson.

Raymond L. Johnson was interviewed by The HistoryMakers on August 17, 2012.

See how Raymond L. Johnson is related to other HistoryMakers
Donate Now
Click Here To Explore The Archive Today!