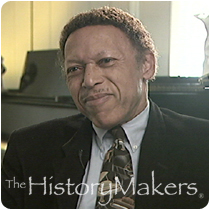 See how Raymond Jackson is related to other HistoryMakers
Donate Now

Musical prodigy, concert pianist, and educator Raymond Thompson Jackson, Jr. was born on December 11, 1933 in Providence, Rhode Island. His mother and father were beauticians and ran a successful beauty business out of their Providence home. Many of the shampoos and oils used on clients were hand-made by his mother. Jackson’s musical talent surfaced at an early age, and by the time he was six years old he could play the piano and read music. When he graduated from Hope High School in 1951, in addition to the piano, he played the bass, violin and organ. While at Hope he also was active in the orchestra, the band and the Young Artists Club. He was awarded the Hope Key for his many musical activities and achievements during high school.

From 1951 until 1955, Jackson attended the prestigious New England Conservatory of Music in Boston. He and fellow classmate, Coretta Scott King, were among a handful of African Americans who attended the Conservatory. Jackson earned a Bachelor’s of Music degree in Piano Performance in 1955. In addition to graduating first in his class he was the recipient of the Conservatory’s highest award, the “George Whitfield Chadwick Medal.” In 1957, Jackson earned a Bachelor’s of Science degree in Piano from the renowned Julliard School of Music in New York. He went on to receive his Masters of Science and Doctor of Musical Arts degrees from Julliard in 1959 and 1973 respectively.

Jackson studied in France at the American Conservatory of Music from 1960 until 1961. After studying in France, he worked as an organist and choir director for several churches in New Jersey until 1973. In 1963, Jackson received a fellowship that allowed him to perform a series of debut piano recitals in Vienna, London, Stockholm, Geneva and Munich. He immediately captured the hearts and applause of European audiences.

In 1970, Jackson began teaching music at the collegiate level as an adjunct professor at The Mannes College of Music in New York City and Concordia College in Bronxville, NY. In 1977, Jackson was offered a faculty position at Howard University, Washington, D.C., where he is a Full Professor and continues to teach piano and serve as Coordinator for student and faculty performances.

Jackson has been the recipient of numerous awards and has won top honors in national and international piano competitions. He was the first African American and musician to be inducted into the Rhode Island Heritage Hall of Fame.

See how Raymond Jackson is related to other HistoryMakers
Donate Now
Click Here To Explore The Archive Today!