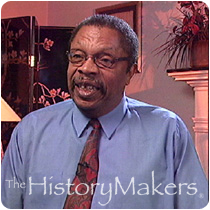 See how Raymond Bowen is related to other HistoryMakers

Scientist turned college administrator Raymond Cobb Bowen was born September 19, 1934 in New Haven, Connecticut. Growing up in the Elm Haven public housing projects, Bowen’s parents, Raymond Curtis Bowen and Lucille Cobb Bowen, were frustrated in their attempts to gain a higher education and wanted more for their son. He attended Baldwin and Winchester elementary schools and graduated from James Hillhouse High School in 1952. He earned a B.A. in zoology in 1956 from the University of Connecticut, an M.S. in biology from the University of New Mexico in 1962 and a Ph.D. from the University of Connecticut in parasitology and biochemistry in 1966. From 1956 to 1959, Bowen served in the United States Army.

Beginning his professional career in post doctoral research at Ohio Wesleyan University and the University of Illinois (1966-67), Bowen was an assistant professor of biology at Cleveland State University in 1968 when black student and community leaders called for black college administrators at the school. Bowen, with student support, accepted an offer to become assistant to the president and then dean of developmental programs at Cleveland State from 1968 to 1971. At LaGuardia Community College of the City University of New York, Bowen was hired as associate professor of natural sciences in 1971, but within the same year was made associate dean of faculty and then in 1973, he became dean of academic affairs. In 1975, Bowen accepted the post of vice president for academic and student affairs for the Community College of Baltimore. In 1982, he was appointed president of Shelby State Community College in Memphis. Back at LaGuardia Community College, Bowen served a joint appointment as president and professor of natural and applied sciences from 1989 to 1999. His two priorities at LaGuardia were multiculturalism and economic development. Bowen spearheaded collaborations with The Dominican Republic, China, South Africa, Columbia and the United Kingdom. Retired in 1999, he served as visiting professor at the Morgan State University Graduate School.

A prolific writer, Bowen has published widely and is in demand as a consultant on multiculturalism and diversity. Bowen serves on the board of Phelps-Stokes Fund and the American Council on Education among many other affiliations. Among his many awards is the designation by Black Issues in Higher Education as One of the Outstanding College Leaders of the 20th Century. He currently lives in Baltimore.

Bowen, Raymond C. “From the Projects to the Presidency” Achieving Administrative Diversity, New Directions for Community Colleges, No. 94, June 1996

See how Raymond Bowen is related to other HistoryMakers
Click Here To Explore The Archive Today!