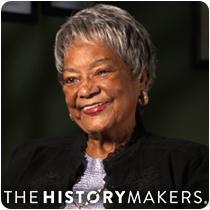 See how Raye Jean Montague is related to other HistoryMakers

Engineer Raye Jean Montague was born on January 21, 1935 in Little Rock, Arkansas to Rayford Jordan and Flossie Graves Jordan. Montague graduated from Merrill High School in Pine Bluff, Arkansas in 1952, and enrolled at Arkansas Agricultural, Mechanical & Normal College (now called The University of Arkansas at Pine Bluff). Initially, Montague aspired to study engineering, but received her B.S. degree in business because the engineering program did not accept African American students.

In 1956, Montague joined the U.S. Navy in Carderock, Maryland, and was stationed at David Taylor Model Basin (now the Naval Surface Warfare Center). Montague worked as a clerk typist for several years, before becoming a digital computer systems operator and a computer systems analyst at the Naval Ship Engineering Center in Washington D.C. Montague was promoted to program director of the Naval Sea Systems Command (NAVSEA) integrated design, manufacturing, and maintenance program; and she also served as the division head of the Navy’s computer-aided design and computer-aided manufacturing program. In 1971 Montague became the first person to design a naval ship using a computer, producing the first draft for the FFG-7 Frigate in under nineteen hours. Montague was the U.S. Navy’s first female program manager of ships and the first program manager of the information systems improvement program. Over the course of her career, Montague worked on the U.S.S. Dwight D. Eisenhower as well as the Navy’s first landing craft helicopter-assault ship. She retired from the U.S. Navy in 1990.

In 1972, Montague received the U.S. Meritorious Civilian Service Award, and was also nominated for the Federal Woman of the Year Award by the secretary of the Navy. In 1982, Montague became the first female engineer to receive the Society of Manufacturing Engineers Achievement Award. She also received the National Computer Graphics Association Award for Advancement of Computer Graphics in 1988. Montague was the first woman to serve on the board of directors for the Numerical Control Society; and she also held memberships with LifeQuest of Arkansas, The Links Inc., Alpha Kappa Alpha Sorority, the Arkansas Association of University Women, and the American Contract Bridge League. Montague was inducted into the Arkansas Black Hall of Fame in 2013, and Arkansas Women's Hall of Fame in 2018. In May of 2018, she was conferred an honorary doctor of laws degree from the University of Arkansas at Pine Bluff.

Raye Jean Montague was interviewed by The HistoryMakers on September 20, 2017.

See how Raye Jean Montague is related to other HistoryMakers