Information about Ray A. Shepard 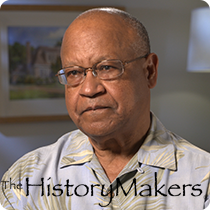 See how Ray A. Shepard is related to other HistoryMakers

Educational publisher Ray A. Shepard was born on June 26, 1940 in Sedalia, Missouri to Cornelius “Boots” Shepard and Loretha Mae Jackson Shepard. He graduated from Lincoln High School in Lincoln, Nebraska and served in the United States Army during “The Cold War,” based in Germany at the time of the construction of the Berlin Wall and the Cuban Missile Crises. After he completed his tour of duty, Shepard earned his B.S. degree from the University of Nebraska, Lincoln in Lincoln, Nebraska in 1967. He received a Martin Luther King, Jr. Fellowship from the Woodrow Wilson Foundation to attend Harvard University and earned his M.A. degree in teaching from Harvard Graduate School of Education in 1971.

While at Harvard, Shepard wrote, “Warball,” which received the first prize in a contest held by the Council on Interracial Books for Children. He also published the article, “Adventures in Blackland with Keats and Steptoe,” which was featured in the Interracial Books for Children Bulletin. In 1973, he published his children’s book Sneakers and Conjure Tales, which was a retelling of short stories originally by Charles Waddell Chestnut. Shepard joined Scholastic, Inc. as an editor. From 1983 to 1987, Shepard worked for Houghton, Mifflin and Company, and then joined Simon & Schuster from 1987 to 1991. In 1991, Shepard returned to Houghton, Mifflin and Company as corporation vice president and editor-in-chief for elementary textbook publishing and served until 2003. Shepard entered the world of private consulting when he became the vice president for educational services at the Consortium of Reading Excellence in 2005. Then, he joined Gibson, Hasbrouck & Associates as the company’s chief operating officer. From 2010 to 2012, he returned to the Consortium of Reading Excellence as vice president and chief academic officer. Shepard then founded IQ History in 2012, publisher of teaching and learning resources for history teachers. In 2017, Shepard authored, Now or Never! 54th Massachusetts Infantry’s War to End Slavery, which follows the paths of two black journalists during the American Civil War. Now or Never! was named a Carter G. Woodson Honor Book by the National Council of Social Studies.

Shepard was a board member for the Highlights Foundation, as well as the Biographers International Group, during his career. He also taught at Phillips Andover Academy and Brandeis University.

Ray A. Shepard was interviewed by The HistoryMakers on August 16, 2017.

See how Ray A. Shepard is related to other HistoryMakers