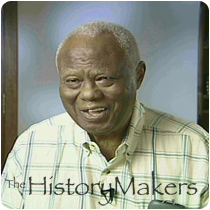 See how Ray F. Wilson is related to other HistoryMakers

Chemistry professor, construction entrepreneur, and lawyer Ray Floyd Wilson was born on February 20, 1926, in Giddings, Texas to Beulah and Fred Wilson. As a young boy, Wilson worked with his family in the fields and with the livestock while going to school. Wilson was drafted by the U.S. Navy in 1944, before he could attend college. He went to submarine school and served in World War II in the Pacific Theater. While in the Navy, Wilson achieved the rank of petty officer third class. After graduating with his B.S. degree in chemistry and math from Samuel Huston College in 1950, Wilson was awarded his M.S. degree in chemistry and math in 1951 from Texas Southern University (TSU). Subsequent to the U.S. Supreme Court’s 1950 decision in Sweatt v. Painter, Wilson was the first African American student to receive a Ph.D. in chemistry and math from the University of Texas at Austin in 1953.

After he received his Ph.D., Wilson joined the TSU Faculty in Houston as an associate professor of chemistry. Rising to the rank of full professor in only four years, Wilson continued to teach at TSU for forty-two years, turning down various offers from other universities and research centers. Wilson authored eighty-three different articles that have appeared in national or international scientific journals. He has been a longtime member and president of the TSU chapter of the Texas Association of College Teachers, and mentored many students.

While working as a professor, Wilson started working as a part-time real estate broker in the 1960s. By the 1970s, he owned and operated his own contracting company and was awarded many major public works contracts in Houston over a period of three decades. In 1972, Wilson received his J.D. degree from TSU, graduating with the highest GPA in the school’s history. Wilson used his degree to do pro bono work for his church, his community and his own interests. After moving to Houston, Wilson was an active member of the Pilgrim Congregational United Church of Christ where he oversaw the Sunday school and church credit union.

During the 1970s and 1980s, Wilson served as a Congressional Counselor to the late Congresswoman Barbara Jordan, the first African American female from a southern state to serve in the U.S. House of Representatives, and Congressman Mickey Leland. Wilson retired from TSU in 1999.

Ray Floyd Wilson was interviewed by The HistoryMakers on August 11, 2007.

See how Ray F. Wilson is related to other HistoryMakers
Click Here To Explore The Archive Today!