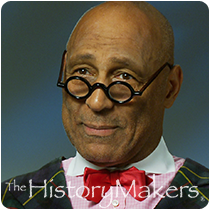 See how Rashid Silvera is related to other HistoryMakers
Donate Now

Model and educator Rashid Keith Dilworth Silvera was born on December 8, 1947 in Boston, Massachusetts to Don Hector and Phyllis Matilda Silvera. Silvera is the nephew of film actor, director and producer, Frank Silvera and second cousin of Albert Silvera, international car collector and Renaissance man. Silvera was raised in Roxbury, Massachusetts and graduated from Williston Academy in Easthampton, Massachusetts in 1967. He then enrolled at Colgate University, but, in 1969, transferred to Bennington College, where he received his B.A. degree in political science and anthropology in 1972. Silvera went on to obtain his M.T.S. degree from Harvard Divinity School in 1974 and his Ed. M. degree from the Harvard Graduate School of Education in 1976.

In 1975, Silvera was hired as a teacher in the history department of the Buckingham Browne & Nichols School in Cambridge, Massachusetts. He taught at Gill St. Bernard’s School in Gladstone, New Jersey from 1976 to 1977, and then at San Francisco University High School in San Francisco, California from 1977 to 1979. Silvera returned to the East Coast in 1979, when he was hired as a social studies teacher at Rye Country Day School in Rye, New York. In 1981, he began teaching at Scarsdale High School in Scarsdale, New York.

Aside from teaching, Silvera worked as a fashion model for a number of years. While staying at the house of a friend in the early 1980's, Silvera was noticed by owners of a modeling agency, who then launched his career as a model. He first modeled for fashion photographer Rico Puhlmann. In April of 1983, Silvera became the fourth black male model to appear on the cover of GQ magazine. His appearance would mark the last time an African American male model would appear on a GQ cover. Silvera also appeared on the covers of Essence magazine and CODE magazine, and was the first African American male to model for a Polo Ralph Lauren advertisement campaign.

Silvera was profiled in Marci Alboher’s 2007 book, One Person/Multiple Careers: A New Model for Work/Life Success, as well as by Black Enterprise in 2011.

Rashid Silvera was interviewed by The HistoryMakers on August 13, 2014.

See how Rashid Silvera is related to other HistoryMakers
Donate Now