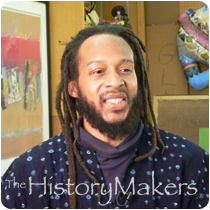 See how Ras Ammar Nsoroma is related to other HistoryMakers

An artist known for his murals, Ras Ammar Nsoroma was born Kevin Wayne Tate on June 20, 1967 in Milwaukee, Wisconsin. When he was only a teenager, Nsoroma became aware of the work of Reynaldo Hernandez, an inner-city mural artist, which inspired him. Nsoroma graduated from the Milwaukee High School of the Arts in 1985 and attended the Milwaukee Institute of Art and Design. Nsoroma completing his first mural as a senior in high school.

In the late 1980s, Nsoroma moved to Chicago and studied at Chicago’s School of the Art Institute of Chicago. He returned to Wisconsin and began working as an artist, designing three-dimensional murals on the Fond du Lac Avenue overpass for the north and south wing walls and bridge abutments. In 2000, two of Nsoroma’s murals were nominated for inclusion in the book, Walls of Heritage, Walls of Pride: African American Murals, a collection of 200 murals spanning three decades of African American mural art. In 2004, Nsoroma designed a mural to celebrate the radio station 1290 WMCS-AM’s 25th anniversary of African American community programming; entitled The Tradition Continues. Nsoroma utilized photographs and created a compilation of twenty-five portraits of men and women who participated in the growth of the station.

Nsoroma has painted more than forty murals, including pieces in Chicago, Los Angeles and Washington, D.C., as well as his hometown of Milwaukee.

See how Ras Ammar Nsoroma is related to other HistoryMakers
Click Here To Explore The Archive Today!