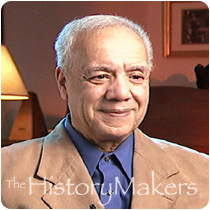 "Come little doll, give me a kiss. (Translated from German)"

Classical singer, author and former assistant to the legendary poet and writer Langston Hughes, Raoul Abdul was born in Cleveland, Ohio on November 7, 1929. Abdul’s father was from Calcutta, India, and his mother was able to trace her ancestry back to the pre-Revolutionary War period. Abdul attended John Hay High School, and later earned a diploma from the Vienna Academy of Music. He also studied at Harvard University, the New School for Social Research, the Cleveland Institute of Music, New York College of Music and the Mannes College of Music.

Abdul was involved in theater from an early age, participating in children’s theater productions by age six. Following graduation from high school, he began working as a journalist for the Cleveland Call & Post, and in 1951, at the age of twenty-two, he relocated to New York City. There, he began studying music, and sang with such notables as William Warfield and Marian Anderson. During this time, Abdul was a founding director of the Coffeehouse Concerts in Harlem, and was a singer in a number of performances, including shows at Carnegie Hall. In 1961, Abdul became the literary assistant and close friend to writer Langston Hughes, and he remained so until Hughes’ death in 1967.

In 1970, Abdul published his first book, 3000 Years of Black Poetry with author Alan Lomax. Over the next few years, he published several more volumes, including The Magic of Black Poetry, Famous Black Entertainers of Today, and Blacks in Classical Music. Abdul gave private voice lessons in his home in New York, based on the Austrian singing technique learned while studying in Vienna.