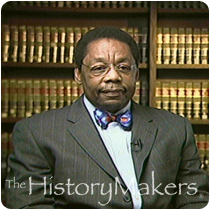 See how Randolph Noel Stone is related to other HistoryMakers

Distinguished professor of law Randolph Noel Stone was born on November 26, 1946 in Milwaukee, Wisconsin. The eldest of seven children, Stone’s parents greatly emphasized the importance of education. After graduating from high school, Stone went on to attend Lincoln University in Pennsylvania where he received an academic scholarship.

Stone was drafted by the United States Army in 1967 and served in Vietnam. After the war, Stone returned and continued his studies at the University of Wisconsin, Milwaukee. In 1972, he graduated with his B.A. degree, and inspired by the legal profession’s icons, Thurgood Marshall and Charles Houston Hamilton, Stone attended the University of Wisconsin earning his J.D. degree in 1975. After graduation, Stone received a Reginald Heber Community Law Fellowship and worked with the Neighborhood Legal Services in Washington, D.C. He then worked as a staff attorney and office director for the Criminal Defense Consortium of Cook County and later as a Clinical Fellow for the University of Chicago Law School before starting his own private practice with Stone & Clark. At that time, Stone was appointed to represent one of the defendants in the “Pontiac Seventeen” Case, then the largest capital murder case in U.S. history. All the defendants were acquitted after a lengthy jury trial.

Stone later served as staff attorney and deputy director for the Public Defender Service of the District of Columbia and as an instructor at Harvard Law School before becoming the Public Defender of Cook County in Illinois in 1988. As the first African American Public Defender of Cook County, Stone was responsible for the management of a $30 million budget and the leadership of over 500 attorneys. In 1991, Stone was appointed as the director of the Mandel Clinic at the University of Chicago Law School where he created the Criminal and Juvenile Justice Project, providing law and social work students with the opportunity to engage in policy reform while defending children and young adults accused of criminal behavior. Stone continues to serve as a Clinical Professor of Law at the Law School. Stone was the first African American to Chair the American Bar Association’s Criminal Justice Section, an organization of over 9,000 criminal defense lawyers, prosecutors, judges, public defenders and other professionals concerned with criminal justice policy. He is a past president of the Illinois Board of Bar Admissions, a founding board member of First Defense Legal Aid (FDLA), the Neighborhood Defender Service of Harlem and former board member of both the Cook County and Chicago Bar Associations. He currently serves on the board of Treatment Alternatives for Safer Communities (TASC), the Sentencing Project, Inc. and on a variety of other advisory boards and committees. Stone has received a number of awards and writes and teaches about criminal and juvenile justice, race and crime, evidence, legal ethics and trial advocacy.

Stone lives in Chicago, Illinois, is married to Cheryl Bradley, has four children and continues to serve the general public through the profession of law.

See how Randolph Noel Stone is related to other HistoryMakers
Click Here To Explore The Archive Today!