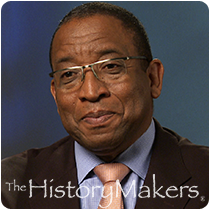 See how Randall Pinkston is related to other HistoryMakers

Broadcast journalist Randall Pinkston was born on March 3, 1950 in Yazoo County, Mississippi. His mother’s aunt, a retired domestic worker, and her husband, a construction worker, raised Pinkston as their son in Jackson, Mississippi.  As a child, Pinkston was fascinated by radio broadcast news. After graduating from Lanier High School in 1968, Pinkston attended Wesleyan University in Middletown, Connecticut, where he joined the campus radio station, WESU-FM. Pinkston left Wesleyan University after the death of his grand-uncle and completed his undergraduate studies at Millsaps College, where he received his B.A. degree in history in 1973.  While attending college, Pinkston worked part-time at WJDX-FM and AM, and, in 1971, was hired as Saturday night anchor and producer for WLBT-TV in Jackson.

In August of 1973, after attending the Michelle Clark Fellowship Program for Minority Journalists at Columbia University, Pinkston was promoted to WLBT’s 6:00 PM newscast, the first African American to anchor the #1 newscast at Mississippi’s #1 television station. In 1974, he accepted a position with Post-Newsweek Station WJXT-TV, a CBS affiliate in Jacksonville, Florida, as the urban affairs director and producer. In 1976, Pinkston transferred to Post-Newsweek’s WFSB-TV in Hartford, Connecticut, where he held posts as anchor, reporter and producer of public affairs programs.

While working in Hartford, he earned his J.D. degree from the University of Connecticut School of Law in 1980. That same year, Pinkston was hired as a correspondent with WCBS-TV, where he worked until 1990 when he was appointed as a CBS News White House correspondent. Pinkston reported on stories of national and international significance from the Persian Gulf War to the nomination of Justice Clarence Thomas. In 1994, he moved to the CBS New York news bureau and served as a correspondent for CBS Evening News as well as a contributor, reporter and correspondent for other CBS news broadcasts, including CBS Reports, CBS 48 Hours, and CBS Sunday Morning.  In 2013, Pinkston ended a thirty-three year career with CBS. His final report included an interview with Myrlie Evers Williams on Medgar Evers’ efforts to open broadcasting to minorities.

Pinkston’s work was first recognized by the Great New York Safety Council for his reporting on underage drunk driving and its influence in the shaping of New York state law on underage drinking and driving. He is the recipient of a national Emmy award and an Edward R. Murrow Award for his work on CBS Reports’ “Legacy of Shame,” and two other national Emmy awards for reporting on the death of Princess Diana and the TWA Flight 800 disaster. He has also received a Community Service Award from the Society of Professional Journalists for a report on the aids crisis among African Americans.

Randall Pinkston was interviewed by The HistoryMakers on June 16, 2014.

See how Randall Pinkston is related to other HistoryMakers
Click Here To Explore The Archive Today!