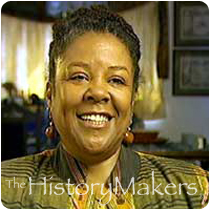 Ramona Edelin was born in Los Angeles, California, on September 4, 1945. At an early age, Edelin's family relocated to Atlanta, Georgia, where she attended elementary school. Edelin went on to Carbondale, Illinois, for some high school; she graduated from Stockbridge High School in Massachusetts in 1963. Following graduation, Edelin attended Fisk University in Nashville, Tennessee, earning her B.A. degree in 1967, and then studied at the University of East Anglia in Norwich, England, for her M.A. degree, completing the program in 1969. Edelin later resumed her education, completing her Ph.D. degree at Boston University in 1981.

After earning her master's degree, Edelin became the founder and chair of the Department of African American Studies at Northeastern University. In 1977, Edelin joined the National Urban Coalition, where she eventually rose to the positions of president and CEO. Under Edelin's guidance, the NUC initiated the Say Yes to a Youngster's Future program, which provided math, science, and technology assistance to youth and teachers of color in urban settings. Under the National Science Foundation's Urban Systemic Initiative, this program was brought to more than two hundred schools nationwide, and was eventually partnered with the Laboratory for Student Success within the United States Department of Education. Edelin also created the M. Carl Holman Leadership Development Institute and the Executive Leadership Program, bringing minorities into leadership development opportunities. In 1998, President Bill Clinton appointed Edelin to the Presidential Board on Historically Black Colleges and Universities; she also accompanied the president on his trip to South Africa that same year. Edelin went on to serve as treasurer of the Black Leadership Forum, which she co-founded.

Edelin served on a wide array of committees and boards of directors, having chaired the District of Columbia Educational Goals 2000 Panel; sitting on the board of the Federal Advisory Committee for the Black Community Crusade for Children; and chairing the board of the D.C. Community Humanities Council. A resident of Washington, D.C., Edelin was recognized by Ebony as one of the 100 Most Influential Black Americans; earned the Southern Christian Leadership Award for Progressive Leadership; and received the IBM Community Executive Program Award.